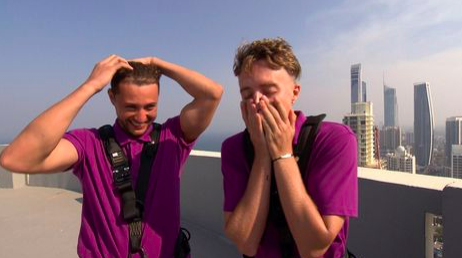 He survived the first big challenge...

Viewers of I’m A Celebrity… Get Me Out Of Here! watched with trepidation as the show kicked off last night, and put the 10 famous faces through their first terrifying trials…

So imagine how you’d feel if you were the parents of one of the stars!

Read more: Former EastEnders actor Cliff Parisi joining I’m A Celebrity… Get Me Out Of Here as 12th contestant?

Roman Kemp, 26, was forced to tackle the plank challenge in strong winds last night, in an attempt to gain entry to the more comfortable camp in the jungle.

And his famous parents Martin and Shirlie Kemp were watching from home, possibly even more terrified than their son!

Capital DJ star Roman and Myles Stephenson, 28, had to climb DOWN a ladder suspended 334 feet in the air off the 32-storey Focus Building on Australia’s Gold Coast.

Hosts Ant and Dec explained that each celeb would walk along a plank and climb down its ladder to reach the ‘yellow zone’.

There, they had to hit a button when a light turned green, before making their way back.

Phew I can breath! Shirlie is shaking!

The duo with the fastest combined response time become one of two ‘Power Pairs’, earning the right to live in the more comfortable Croc Creek camp.

As if the challenge wasn’t terrifying enough, the stars also had to contend with unusually high winds.

“Thankfully we’ve had a word with health and safety and we’re still fine to do it,” confirmed Ant.

While Ian Wright and Jacqueline Jossa came in at 3.40 seconds, Andrew Maxwell and Kate Garraway were just ahead on 3.39 seconds.

But Myles and Roman were the clear winners, with a combined time of 1.45 seconds – making them a Power Pair.

Well done on the ladder.. phew I can breath!!!#imacelebrity … Shirlie is shaking!!!

He tweeted: “Well done on the ladder… Phew I can breath! Shirlie is shaking!”

Shirlie also tweeted, admitting she was “so nervous” to watch her son take part in the ITV show.

Former EastEnders actor and Spandau Ballet star Martin, 58, and his singer/dancer wife Shirlie, 57 – who were introduced by the late George Michael – also have a daughter Harley Moon.

Talking about his famous dad – who he appeared with on Celebrity Gogglebox – Roman joked: “I am not scared of the eating trials because I grew up with Dad’s cooking!

“I think the eating ones I will hate but I will do them. The show is iconic and you want to do everything.”

Asked what his parents thought of him doing the show, Roman said: “My Dad loves it. He is ready to find the worst freeze frame possible of my face and put it out on social media!

“Mum will say she hates it up until the day I get in there. Once she sees the show, understands it and grasps I am in there, I think she will be alright. She is really nervous though!”

TV fans know that Martin is no stranger to hardships himself, after taking part in Bear Grylls’ Celebrity Island, in which he lost two stone.

Who is your early favourite to win I’m A Celeb? Let us know on our Facebook page @EntertaimentDailyFix.