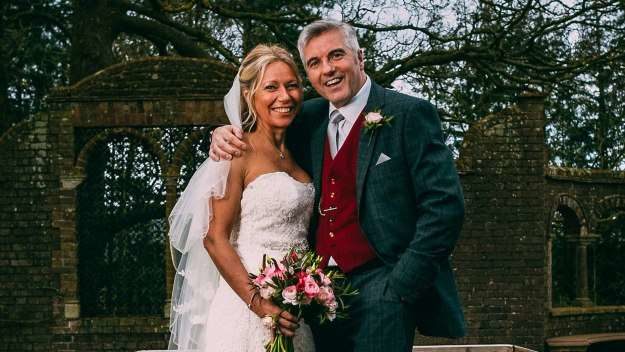 Married at First Sight: Who are the UK couples?

Everything you need to know about Shareen and David, and Michelle and Owen...

The series usually features three to five couples, who are paired up by relationship experts.

This series, due to the Covid-19 pandemic, only two couples feature.

Here’s everything you need to know about them…

Who are the couples on Married at First Sight 2020?

Four singletons put their trust in dating experts to find them their perfect partner, as they marry a complete stranger who they meet for the first time at their wedding.

Who are Michelle and Owen on MAFS?

Minutes into the first episode of series five, it looked like this year’s Married at First Sight UK matchmakers had got it right with 25-year-old Michelle and 31-year-old Owen.

Michelle and Owen instantly hit it off despite never having met before.

He calmed her down at the altar as she appeared to be nervous and she later thanked him calling him “the perfect guy”.

Owen then called her a “fittie” and the pair posed for intimate pictures like they’d known each other their entire life.

She says: “I’m at a stage where everything in my life is in a really good place so I just want someone to share it all with.

“I really buy into this process and I think, sometimes, in relationships you tend to make the same mistakes again and again. Whereas the matchmakers getting to know me and then matching me based on what they think will be good for me.”

Owen, 31, volunteers at a local children’s hospice, as well as holding down his job as an IT sales manager.

Sheffield-born Owen joined the show for the “opportunity to get properly matched by experts”.

He adds: “Marriage is a huge commitment which makes you put effort into a relationship to make it work in the first few weeks, the idea of that really appealed to me.”

Who are Shareen and David?

David and Shareen are the oldest couple to ever be matched on the show.

The experts thought sparks would fly but, as the first episode ended, the preview for this week’s episode showed Shareen admitting she has her doubts about the match.

Shareen is a 47-year-old events/sales manager.

She has three grown-up-daughters and currently lives in Llanelli, Wales.

Originally from Durban in South Africa, Shareen has never previously been married and has been matched with David.

Shareen said she signed up for the show after seeing it advertised and “just knew” that this was how she’d meet her future partner.

Solihull-based David is a 56-year-old sales director with an adventurous streak.

He’s been married once before and has two older teenage children.

David describes the process as “very intensive”, but admits he fancied Shareen as soon as he set eyes on her.

Who are the dating experts?

This year, Celebs Go Dating matchmaker Paul C Brunson – who is known as the ‘real-life Hitch’ – will be pairing the couples.

Where did the couples get married in Married at First Sight 2020?

The couples tied the knot in Eastwell Manor in Ashford Kent.

Primary school teacher Michelle married IT sales manager Owen in the first episode of the series.

Elsewhere, divorced parents Shareen and David hoped to find love second time around and create a blended family for the five children they have between them.

The manor is situated four miles from Ashford International station and comprises of a spa hotel which overlooks beautiful lawns and is set in quiet surroundings.

To find more about the venue, you can check out their website or find them on Instagram.

But did you know? The wedding is a real civil ceremony, and legally binding.

Where else is Married at First Sight filmed?

Michelle comes from Hastings, while Owen is from Sheffield.

Shareen lives in Llanelli in Wales and David is from Solihull.

Read more: The Bridge: Channel 4 viewers divided over contestants as some brand them ‘annoying’

What happens in episode two of MAFS?

Michelle and her new husband Owen have an awkward start to married life.

Newlyweds David and Shareen hit a bump in the road on their honeymoon following a fairy-tale ceremony.

David presents his new bride with an unexpected gift…

What happens in episode three of Married at First Sight?

The Covid-19 pandemic sets in just as the couples prepare to move in together, putting an unprecedented additional strain on their fledgling relationships.

Owen and Michelle face a heartbreaking dilemma as measures ease.

David and Shareen come together to enjoy a romantic glamping getaway.

When was Married at First Sight UK filmed?

Filming of the Channel 4 series kicked off in January this year, which was at the time when the first coronavirus cases were reported in the UK.

The couples were matched back in January, and the weddings took place in mid-March.

This means the couples were forced to isolate together when the UK went into lockdown.

Michelle and Owen, therefore, were given the length of the lockdown to decide whether they wanted to stay married or get divorced.

You can find out where all the couples are now here.

What do you think of this year’s couples? Leave us a comment on our Facebook page @EntertainmentDailyFix.