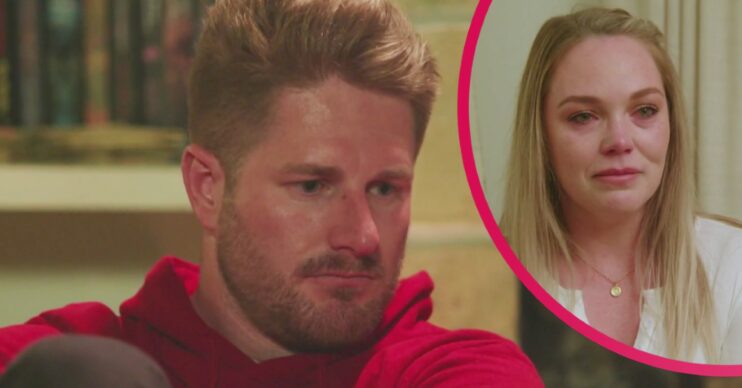 Their honeymoon got off to a rocky start

Married At First Sight Australia star Bryce has been slammed by viewers over his comments to Melissa.

The couple were one of the first contestants to tie the knot on the Aussie version of the E4 reality series.

Despite initially hitting it off, their honeymoon soon took an unexpected turn last night (October 6).

Married At First Sight Australia: What happened between Bryce and Melissa?

During Wednesday’s episode, Bryce and Melissa headed on their honeymoon in a romantic log cabin.

The pair appeared in good spirits, however it didn’t last long.

Melissa started by gushing over her new husband, declaring that she thought Bryce was “hot” after meeting for the first time.

She then asked Bryce: “Am I your usual type?”

Bryce responded: “I’ll be completely honest, not 100 per cent. But definitely when I first saw you ‘not my type’ but you have got blonde hair, she’s not ugly.”

Melissa seemed visibly upset as she questioned Bryce’s intentions in the experiment.

The reality star added: “I just want to make sure you’re here for the right reasons…”

Bryce replied: “I wouldn’t be wasting my time if I wasn’t. If I wasn’t here for the right reasons, I simply wouldn’t be here.”

Melissa apologised to Bryce, before breaking down in tears and walking out of the room.

How did MAFSA viewers react?

However, the moment didn’t sit well with angry viewers at home.

One said: “What the hell Bryce?! I’m furious. #Gaslighting #MAFSAUS.”

Poor Melissa. Bryce needs to give her a cuddle and stop talking crap to her. She deserves better#MAFSAUS #MAFSAustralia #MarriedatfirstsightAustralia

Sweet Jesus! Bryce is either an idiot or a manipulative mastermind…. #MAFSAUS

Another added: “Sweet Jesus! Bryce is either an idiot or a manipulative mastermind… #MAFSAUS.”

In addition, a third wrote: “Poor Melissa. Bryce needs to give her a cuddle and stop talking crap to her. She deserves better.”

A fourth complained: “Bryce… you arrogant [bleep]. Poor Melissa apologising to YOU. You should be saying sorry to her.”

A fifth tweeted: “#MAFSAUS you slept with her on the first night Bryce. How to destroy someone in one cruel line. (For the record, you are punching there chum).”

Bryce is a narcissist

However, one shared: “Bryce and Melissa are my couple. I don’t need to meet the others. They’re it. #MAFSAustralia #MAFSAU.”

ED! has contacted E4 for comment about this story.