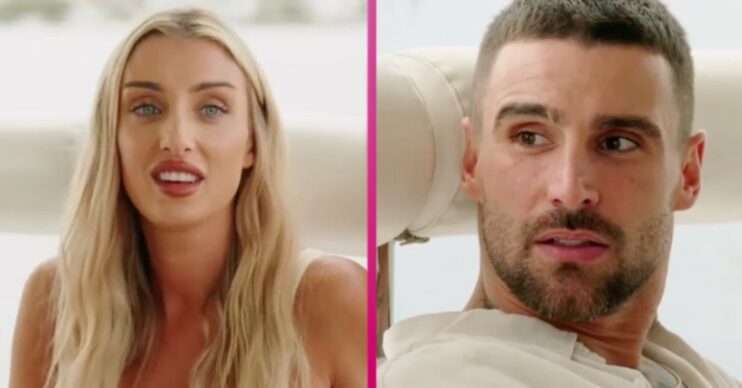 Married At First Sight Australia: Are Tamara and Brent still together?

We must warn you about spoilers, although...

Tamara and Brent’s marriage appears to be on the rocks after this week’s Married At First Australia.

The pair’s relationship has been bumpy since the beginning, but as time has gone on they’ve tried to turn things around and save their marriage from the brink.

However, an almighty argument has us all wondering if they’ll even make it past their final vows.

So are Tamara and Brent still together?

After Wednesday night’s episode, fans have lost all hope for Tamara and Brent’s relationship.

Things started off well between Tamara and Brent as they embarked on what was supposed to be a romantic date on a luxury yacht.

However, within seconds their date went downhill when Tamara blurted out: “You hide your insecurity with your ego.”

The pair got into yet another explosive row, that ended in Brent storming off saying: “I think I’m done, mate.”

Tamara then proceeded to argue, throwing shade at Brent’s career.

She said: “He doesn’t really have a career! He works in hospitality and he calls himself a [bleep] restaurant expert or some [bleep] like that.

“I’m sorry, ya wait tables! I’m not being rude about it but that’s what you do. Own it.”

Are Tamara and Brent still together?

Viewers won’t be surprised to hear that after their turbulent time on the show, Tamara and Brent are no longer together.

In fact, the pair don’t even make it through their Final Vows ceremony!

After weeks of feuding, the pair decide to mutually end things during their vows.

Following the ceremony, Brent told The Handbags podcast: “I’ll be honest, I planned to drop the cards. I’d had enough and I was ready to walk away and make a statement that she needed to understand.

“I had taken shot to shot from Tamara and I wanted to say my piece and walk away. It took me a week to write that speech.”