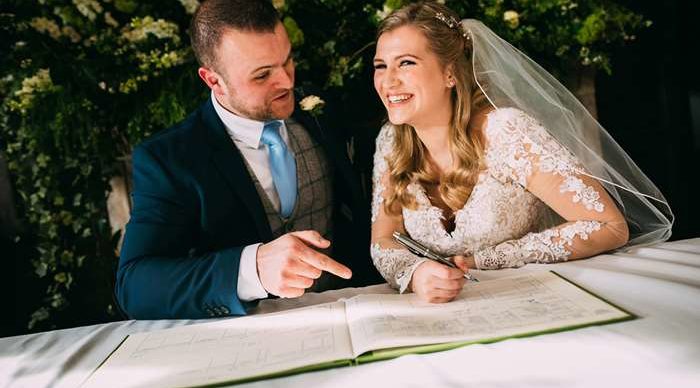 The UK reality series introduces two strangers and marries them straight away! But where do they marry?

Married at First Sight continues on Channel 4, pairing singletons hoping to find love and marry in a beautiful venue…

The reality show Married at First Sight is like the ultimate blind date, but the couples dispense with months of dating – and get hitched straight away!

But where do they marry? And is it legal?

Where is the Married at First Sight wedding venue?

Where did the couples get married in Married at First Sight 2020?

The couples tied the knot in Eastwell Manor in Ashford Kent.

Primary school teacher Michelle married IT sales manager Owen in the first episode of the series.

Elsewhere, divorced parents Shareen and David hoped to find love second time around and create a blended family for the five children they have between them.

The manor is situated four miles from Ashford International station and comprises of a spa hotel which overlooks beautiful lawns and is set in quiet surroundings.

To find more about the venue, you can check out their website or find them on Instagram.

But did you know? The wedding is a real civil ceremony, and legally binding.

Where else is Married at First Sight filmed?

Michelle comes from Hastings, while Owen is from Sheffield.

Shareen lives in Llanelli in Wales and David is from Solihull.

Read more: The Bridge: Channel 4 viewers divided over contestants as some brand them ‘annoying’

What happens in episode two of MAFS?

Michelle and her new husband Owen have an awkward start to married life.

Newlyweds David and Shareen hit a bump in the road on their honeymoon following a fairy-tale ceremony.

David presents his new bride with an unexpected gift…

What happens in episode three of Married at First Sight?

The Covid-19 pandemic sets in just as the couples prepare to move in together, putting an unprecedented additional strain on their fledgling relationships.

Owen and Michelle face a heartbreaking dilemma as measures ease.

David and Shareen come together to enjoy a romantic glamping getaway.

What happens in episode four of MAFS?

Owen and Michelle have a make-or-break decision after four months as husband and wife, as they deal with living 250 miles apart.

When was Married at First Sight UK filmed?

Filming of the Channel 4 series kicked off in January this year, which was at the time when the first coronavirus cases were reported in the UK.

The couples were matched back in January, and the weddings took place in mid-March.

This means the couples were forced to isolate together when the UK went into lockdown.

Michelle and Owen, therefore, were given the length of the lockdown to decide whether they wanted to stay married or get divorced.

Married at First Sight continues on Tuesday 13 October on Channel 4 at 9.30pm.

What do you think of this year’s couples? Leave us a comment on our Facebook page @EntertainmentDailyFix.