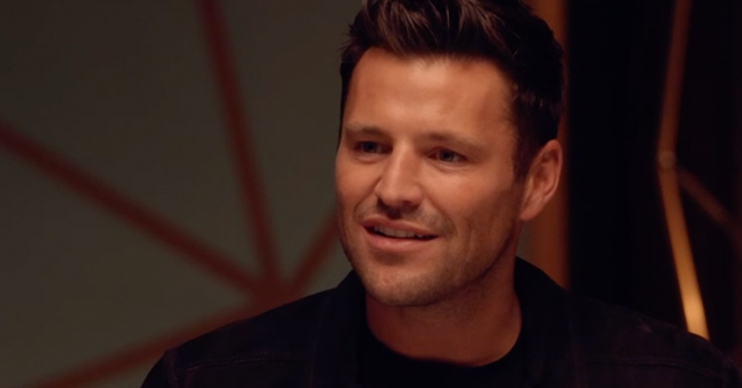 Viewers are now busy searching for the clip on YouTube

BBC Two’s celebrity dining show I’ll Get This returned for another series last night (Tuesday, April 14). And it might have served up some trouble for Mark Wright after he told a cheeky story about his wife!

Each programme sees five celebrities play games between dinner courses – and the loser has to pay for everybody’s meal.

And even though she didn’t appear on screen, Mark’s actress wife Michelle Keegan also had a presence on the show.

However, her ‘presence’ may not be something Michelle would necessarily want discussed during dinner.

That’s because her name cropped up during a chat about breaking wind on air.

You can YouTube my wife doing that on Corrie.

Asked ‘Have you ever farted during a live broadcast?’, sport presenter Gabby insisted she had not.

But she did admit that viewers once thought she had during an episode of Match of the Day.

However, Gabby maintained she had not let rip while the cameras had been rolling. She blamed any noise that sounded like she could have been flatulent on her “shoe or something”.

When the question was asked of former TOWIE cast member Mark, he was slightly less discreet.

And he even shifted Our Girl and former soap star Michelle into the firing line, rather than himself.

“You can YouTube my wife doing that on Corrie,” Mark said.

“She goes to laugh or cry,” he continued, before correcting himself.

“She goes to cry… she’s going to kill me for saying this… but they used that take.”

With his fellow guests clamouring for more details, Mark explained that Michelle ‘exploded’ with the offending noise as she was pretending to weep.

He continued: “She went to cry [with a heavy sobbing noise], one of them type of cries.”

But Michelle apparently spluttered out another noise, too.

Mark added: “Obviously after she asked to do it again, but they used that take .”

“So YouTube it!” he recommended to his fellow guests.

And it wasn’t only the celebs who may have looked the noise up.

Comments on social media suggested fans had gone looking for the clip, too.

“Watching ‘I’ll Get This’, and I’ve just searched ‘Michelle Keegan Cry Farts’ on YouTube thanks to @MarkWright_,” tweeted another.

“In [blank] tears!!! I feel someone will be sleeping in the spare room later!”

And someone else, posting the clip, added: “@MarkWright_ made my day telling the nation about this!”