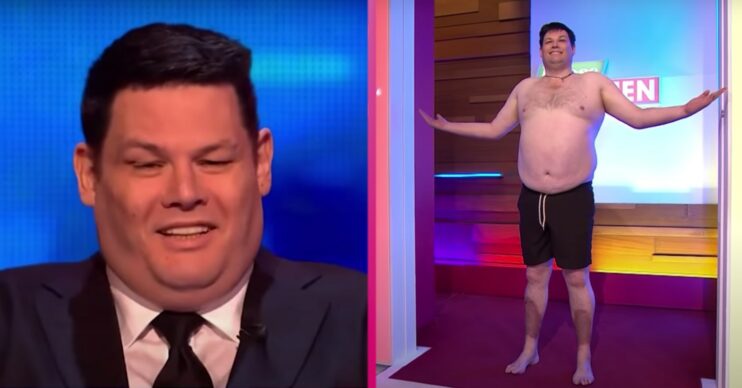 Fans of Mark Labbett were left tittering after The Chase star shared an image highlighting his impressive weight loss.

The 55-year-old quiz favourite has dropped 10 stone over the past few years following a diabetes diagnosis.

And although The Beast is proud of his healthier lifestyle, he still enjoys a roast dinner… particularly at his much-loved Toby Carvery pubs.

The Beast tweets about his eats

Mark shared how he had enjoyed eating out with presenter Emma Louise Jones.

Posting a snap of them both to Twitter, he joked in the caption: “Having a @tobycarvery at Barnsley with superstar presenter @eljonesuk.  She ate more than me but wimped out of the pudding :(.”

Nonetheless, despite his weight loss, Mark later confirmed when responding to a tweet from Toby Carvery’s social media team that he had still partaken in afters.

He tweeted: “I had the fruit crumble, it was absolutely divine!”

Despite Mark’s weight loss efforts having been going on for some time, many followers were still taken aback in the change in his appearance.

One person responded to Mark’s tweet: “You are certainly looking trim, sir. I salute you. Keep going strong.”

You are certainly looking trim.

A second person congratulated him: “Surprised you weren’t at a salad bar by the looks of you. Well done.”

And a third pondered: “Where’s The Beast gone? More like a cub.”

Having a @tobycarvery at Barnsley with superstar presenter @eljonesuk. She ate more than me but wimped out of the pudding 🙁 pic.twitter.com/rxPaxu9Esj

But what happened to Mark’s arm?

However, among the congratulations, many of those replying to Mark were completely tickled by another aspect of the photo.

That’s because the angle of Emma’s selfie made it appear that Mark’s left arm – presumably tucked behind his back – was missing.

Many amused onlookers wondered about whether Mark was dropping weight in unusual ways.

Another tweeted: “Looks like she was so hungry she ate your arm @MarkLabbett.”

A third person riffed: “By the looks of it she’s eaten your arm, too.”

“Drastic way to lose weight… cutting your arm off!” wisecracked someone else.

And yet another person replied to Mark: “Must have been difficult without arms.”