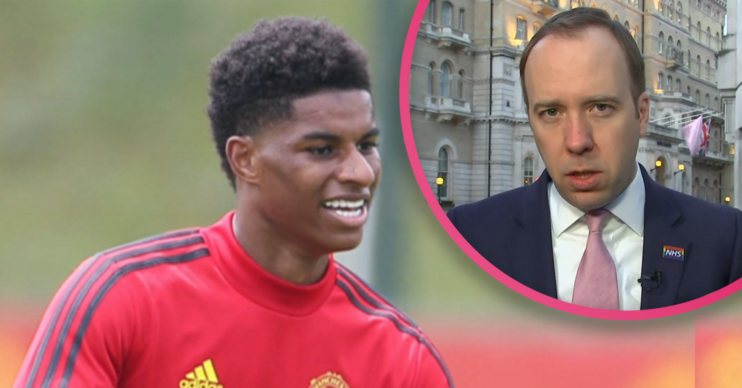 Piers Morgan was quick to point out the Health Secretary's blunder

Marcus Rashford has reacted to Matt Hancock getting his name wrong.

During an interview on Good Morning Britain today (June 17), Piers Morgan revealed the Health Secretary had bizarrely referred to the Manchester United player as Daniel.

When asked for his thoughts on the blunder, Marcus laughed.

Brushing off Matt’s mistake, he said: “That’s alright – I’ve been called worse names than that.”

Marcus appeared on GMB to discuss his campaign to get free school meal vouchers for children across the UK this summer.

The government had planned to take the vouchers away but made a dramatic U-turn in response to the footballer.

Footballer discusses his childhood on GMB

Explaining why he wanted to campaign, Marcus revealed his mother struggled financially while raising him.

“It’s definitely a tough situation to be in,” he said.

“When you’re kid, you see the effect it has on your loved ones around you and it’s not nice to see your mum stressed or unhappy.

“That was the thing that affected me when I was young and what drove me to try and change that for her and my family.

“I understand the position kids are in – and parents especially too. I wanted to change it as much as much as I could.”

He added: “If something like this had happened when I was younger, it would have changed my mum’s life massively.”

🤦‍♂️ Too early. But in all seriousness Marcus you’re a credit to the nation.
🧙‍♂️ https://t.co/nAaOG3wwlL

Thanks to Marcus’ campaigning, 1.3 million will now have access to free school meal vouchers.

But he added that more action still needs to be taken.

“We need to stay on this topic,” he stressed.

“After the six weeks is up, we need to think of ways to keep it going forward.

“I’ve never looked at the data as much I have in the past week and a half – and the numbers are really shocking.”

He added: “There shouldn’t be kids that go hungry and don’t have food on the table.”

The footballer used the conversation as an opportunity to thank the prime minister for reconsidering his decision to stop the scheme.

Marcus is set to return to the pitch on Friday as his team take on Tottenham.

Due to lockdown, footballers haven’t been able to play so this will mark his first match in months.

“The first game back will be difficult,” Marcus admitted, “but we’ve been preparing for a long time so hopefully we can win.”