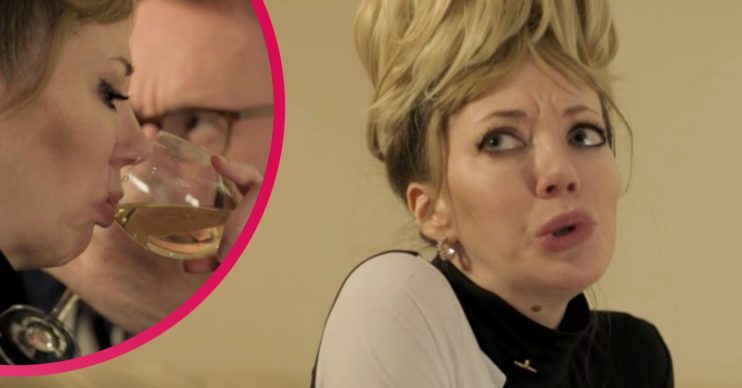 Mandy on BBC Two: Viewers ‘wheeze with laughter’ as star is forced to drink her own wee

It's available to watch in full on iPlayer

Episode four of the show, available to watch in full on iPlayer, saw the titular Mandy (Diane Morgan) go on a date with Geoff (Sean Lock), a man obsessed with fish.

What happens in the Fish episode of BBC Two series Mandy?

After inviting her over to his place, Sean went to the toilet and Mandy, alone with her bottle of wine, unfortunately found herself desperate for the loo too.

But with the bathroom occupied and having nowhere to do her business, she poured the bottle of wine into Geoff’s fish tank, dooming his beloved fish.

Rolling up a magazine to use as a kind of funnel, Mandy then proceeded to urinate into the bottle.

When Geoff returned, not knowing what had happened he poured them both a glass – and took a sip of the fresh wee.

Mandy, seemingly unable to do anything else, joined her date in drinking the ‘wine’.

Reacting on Twitter, viewers thought it was hilarious, with one calling the episode as a whole the “perfect 15 minutes”.

One said of the episode: “If you don’t find Sean Lock drinking wee from a wine bottle whilst his fish are dying from a wine-induced death funny, we cannot be friends #Mandy.”

Another wrote: “The Fish episode of #Mandy is a perfect 15 minutes. Thank you @missdianemorgan @BBCTwo.”

A third tweeted: “Me and my parents were wheezing with laughter at Mandy earlier. My Mum never laughs at anything, that’s how funny the fish episode especially was tonight.”

If you don’t find Sean Lock drinking wee from a wine bottle whilst his fish are dying from a wine induced death funny, we cannot be friends #Mandy

The Fish episode of #Mandy is a perfect 15 minutes. Thank you @missdianemorgan @BBCTwo

When the series got underway on BBC Two last week, viewers were in stitches over a scene in which Mandy got her hair trapped in an extractor fan.

What do you think of Mandy? Leave us a comment on our Facebook page @EntertainmentDailyFix and let us know.