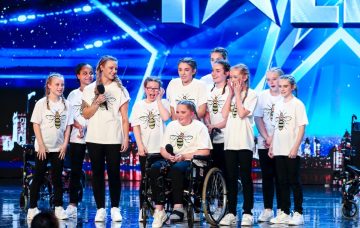 Brave Hollie Booth dances in her wheelchair - and it's emotional!

Britain’s Got Talent is well-known for its many emotional moments, but few have been quite as moving as the one viewers will see tonight.

The theatre is just minutes from the Manchester Arena where Hollie survived the bomb attack that killed 22 people attending an Ariana Grande concert last year.

Hollie’s aunt, Kelly Brewster, was one of those killed in the attack and Hollie suffered horrific injuries to both her legs, resulting in 11 operations so far.

Hollie is still unable to support herself on her left leg, but performs the routine in a wheelchair while her friends do the same.

The finale of the group’s dance sees Hollie ‘rise’ from her wheelchair with her fist raised in the air, and it’s a moment that leaves the judges so overcome with emotion that they can hardly speak.

“You know what Hollie, it is, wow, this is difficult,” says Simon Cowell.

“I’m trying to put… to go through what you went through and turn a negative into a positive is unbelievable.”

“Because what these people did, because they’re cowards, and the fact you can come on stage, do what you did, and make such a positive statement with your friends. I’m very proud of you. In fact, I salute you,” he continues.

Alesha Dixon is also amazed by the performance and says it is a high-point of the show for her.

“You are all remarkable women and that was one of my favourite moments ever on this show. Ever!”

“I think the whole of Manchester will be proud of you. The whole of the UK will be too.”

Amanda Holden is also impressed by what she sees.

“Girls, it’s so important not to be defined by tragedy but to be shaped by it. Congratulations it was an amazing audition,” she says.

Hollie herself says that she was ‘nervous’, but wanted to perform on the show to ‘inspire other people’.

“I just wanted to do it to help inspire other people,” she told The Mirror.

“It was nice to have the other girls with me. We learnt the routine in two weeks, but we’d been dancing using the wheelchairs since before Christmas,” she continued.

Read more: Viewers accuse all these top TV shows of being fixed

“I was very nervous doing it in front of the judges. I felt better once I was on the stage. It was very emotional. It just felt nice. I was proud.”

Wearing the iconic Manchester bee t shirts, the group of 10- 24 year olds gather in a group hug at the end of their dance.

And their performance moved the judges so much, that they even ventured backstage to speak to them– something that has never happened on the show before.

It’s quite a moment for the show, so get ready for an emotional episode tonight!

What’s been your fave BGT moment so far? Let us know by commenting on our Facebook page @EntertainmentDailyFix!