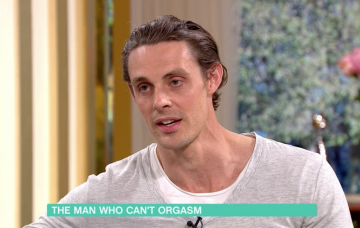 Man who can’t orgasm wins over This Morning fans

A man who can’t orgasm has been swamped with messages of support — and some offers of romance — from This Morning viewers.

Ben, known as The Naked Professor, opened up about how posting naked photos of himself at London landmarks to his 19,000 Instagram followers has helped him come to terms with his condition.

The 36-year-old, who suffers from “delayed ejaculation” disorder, told hosts Eamonn Holmes and Ruth Langsford that the first time he had sex, aged 18, “it just didn’t happen”.

He said: “It doesn’t happen. Through my 20s it had been a bit of a laugh. The lads were calling it a bit of a gift, ‘You can go on for ever, staying power’.

“But at the age of 30 I started to think about family and how it could affect relationships negatively, and it was something I didn’t want in my life any more.

“I tried all sorts of different medicines, neurologists, doctors, therapy. I’ve tried everything and nothing has worked, but it has made me grow as a person.”

He said the turning point came when he spoke by chance to a life coach and psychologist.

“We started having a conversation and she completely rewired my whole mind.

“Initially I always thought this was something physical that was existing and it was just the way it was, and then she taught me that actually this is something that arose mentally.”

“That’s not unusual. What is unusual is for it to be a persistent problem. It affects far more women than men.

“It’s much rarer in men and it’s even rarer in young men.

“It can have a massively significant impact on your mental wellbeing.”

The minute I stopped caring about what other people thought and started doing what I wanted to do is the minute I finally felt free. * @alin.ostafe and I waited a long time to get this picture. It’s a busy place and although we were desperate to capture the moment, we weren’t there to cause any offence to passers by. Just as we were going to give up, we got a moment to ourselves and Alin did the rest 🙏🏼. We hope it tells a story of living free, not following the crowd and being vulnerably yourself. * 📸 @alin.ostafe #livefree #freedom #onelife #thenakedprofessor #mentalwellness

Explaining his nude Instagram posts, Ben, who isn’t a real professor, said: “I wanted to do something over the course of learning about what was going on.

“I was growing mentally and started to embrace vulnerability and to represent who I really was.

“So I started writing about this stuff but I knew I needed a story, a tagline, a USP that might get people’s attention to see what I was writing about.

What is your purpose? We are all different, we have different needs, challenges, likes & dislikes. What works for me won’t work for others, & what works for them, won’t work for me. But one thing that we all have in common is, we owe it to ourselves to give this game of life our best shot in line with our own personal values & desires. * I worked in a London office for 6 years, it gave me a lot, most notably friendship and financial security, but my empty gut instinct was telling me I was missing creativity and freedom. Regular office hours, the lack of creative opportunities and a draining daily commute, meant I spent a lot of my week feeling stripped of true fulfillment. Sitting between the office walls, I felt trapped to the point that I eventually quit my day job, to take a chance for myself, by pursuing my own business opportunities. * Ever since that day, I’ve faced financial insecurity, missed out on holidays and adventures, said no to dinners, parties & opportunities that I would have loved to have been part of. In fact, I’m still saying no to this day. But for all my sacrifices, I’ve gained a sense of freedom, inspiration, opportunity & the chance to create my own destiny. * I’ve chosen this path because I’m connected to the fact that these are the key motivations that make me feel alive. Above all else, I crave chasing a life that sets my soul on fire. In order to make that happen, I’m prepared to do things that others won’t & make short term sacrifices for what I believe will be long term gain. * It’s not for me to tell you what your purpose is, or how to live your life, we are different people with different perspectives & motivations. What I will do, is invite you all to spend time connecting with what your heart is telling you and to do all you can to steer your energy in that direction. Once that’s clear, educate your brain, spend time with like minded people, be bold with your choices & go beyond the norm to immerse yourself in that space. We have one life, do what your heart craves most of all. * 📸@alin.ostafe * #sunset #cityoflondon #onelife #escapethecity #thenakedprofessor

“The images represent the vulnerability that I’m trying to embrace, the freedom.

“I believe everything shows up in your life for a reason because it changed me and helped me grow into who I am today.”

He said the pictures were taken early in the morning when no one was around so he did not cause offence, which would be a criminal act.

Appearing naked in public in itself is not illegal.

Many viewers voiced their support and sympathy for Ben on Twitter.

#thismorning ‘the man who can’t orgasm’ – poor guy, good on him for raising awareness though

I feel for the guy on #ThisMorning who cannot orgasm. There aren’t many pleasures in life so his life must be tough. He is such a nice guy too.

Good for Ben for speaking about something that men don’t talk about. Very brave and selfless. #thismorning

Others expressed their affection for him in more open ways.

I would happily help that Ben acheive an orgasm #ThisMorning

What do you think of Ben? Leave us a comment on our Facebook page @EntertainmentDailyFix and let us know what you think!