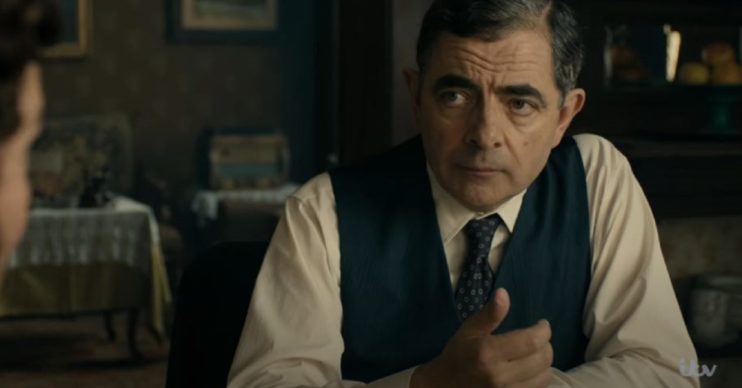 Fans of Coronation Street were stunned last night to see the actor who plays evil Geoff Metcalfe pop up in Maigret.

On Sunday evening, ITV aired a repeat of the detective drama Maigret Sets a Trap – a feature-length episode that first aired in 2016 and stars Mr Bean actor Rowan Atkinson as the titular chief inspector.

Set in 1950s Paris, it tells the story of a series of gruesome murders in the French capital’s quaint village of Montmartre.

Who does Ian Bartholomew play?

There are a number of recognisable faces in the supporting cast, including Killing Eve’s Fiona Shaw and Friday Night Dinner favourite Mark Heap.

But viewers were both delighted and shocked to see one of Corrie’s most talked-about villains crop up.

Ian Bartholemew, who plays horrible abuser Geoff in the ITV soap, also has a role in Maigret Sets a Trap. He plays a reporter known as the Baron.

Reacting on Twitter before Maigret Sets a Trap was over, viewers joked that Ian’s character must be the killer.

One asked: “What’s Geoff Metcalfe doing on Maigret? He must be the killer! #Corrie #maigret”

Another said: “See nasty Geoff from #Corrie is in #maigret on ITV now.”

Someone else said: “#Maigret mon dieu! It’s Geoff from #Corrie! He dun it!”

“Women being murdered and Geoff is a reporter… that’s where you need to start looking,” reasoned another viewer.

What’s Geoff Metcalfe doing on Maigret? He must be the killer! #Corrie #maigret

See nasty Geoff from #Corrie is in #maigret on ITV now

Women being murdered and Geoff is a reporter .. that's where you need to start looking #Corrie #maigret

In Coronation Street, Geoff’s abusive behaviour as continued to stir up viewers.

His victim, Yasmeen Nazir, was jailed for defending herself by stabbing him and furious fans have started a petition to have her freed.

Whatever happens, it seems the story will continue for some time.

Show boss Iain MacLeod revealed at a recent virtual Coronation Street press event: “The timelines [are] shunted due to the lockdown but I think it’s fair to imagine that it will be this year.

“What form of comeuppance is up for discussion. We wanted a redemptive ending for Yasmeen obviously and the toughest it’s going to get for her is over the next months.

“It’s towards the end of the year but the key thing is to impart the right message. For the sake of the people it has impacted we have to tell the right ending with some positivity.”