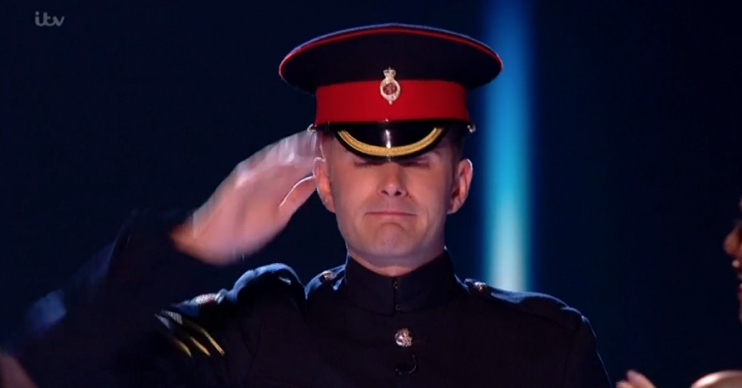 The 28-year-old won Britain’s Got Talent in 2016 after sharing the stage in the final with the World War II veteran, who died last year aged 99.

Before his performance on tonight’s show, soldier Richard spoke movingly of how his idol Fergus, who used to perform  magic to boost morale among troops, showed him some of his tricks before he passed away.

We’re not crying, you’re crying! 😢@richjonesmagic‘s emotional return to #BGTChampions left the whole of Wembley Arena lost for words 💕 Fergus Anckorn would be so proud! pic.twitter.com/jIO5JiclDm

Taking to the stage at Wembley Arena for BGT: The Champions, he was clearly emotional and had the audience, both at home and in the crowd, reaching for the tissues as he spoke of the former prisoner of war.

“He taught me some valuable life lessons,” Richard said, choking back tears.

“He taught me that it’s not how much time we have here in life that matters but it’s how we choose to spend that time that really counts.

“He taught me to live in the moment and create lasting memories every day.”

After his performance, judge Amanda Holden told him: “Fergus would be proud of you.”

David Walliams said: “You are a class act. You’ve got this amazing ability, you don’t have cheesy patter, you just perform in an incredibly dignified way and you’re always perfectly true to yourself.”

As he was urged by the audience to press his golden buzzer, David added: “I’ve never seen a reaction like this in the room for anybody, so I don’t think you need my golden buzzer.”

Richard, the only magician to win Britain’s Got Talent, told hosts Ant & Dec: “I knew it was going to be an emotional act because of what I was talking about.

“But seeing the support from the room, I didn’t expect it. It threw me a little bit.

“Sorry for getting so emotional, it’s just such a kind thing to see. I really appreciate it. It means a lot.”

One posted: “First act in and I’m already crying like a baby.”

Another wrote: “Richard Jones was a great champion. Fergus was a hero. So emotional, so deserved.”

Well, this is a bit more emotional than I expected. #BGTChampions

Richard Jones was a great champion. Fergus was a hero. So emotional so deserved #BGTChampions

* BGT: The Champions is on ITV every Saturday night.