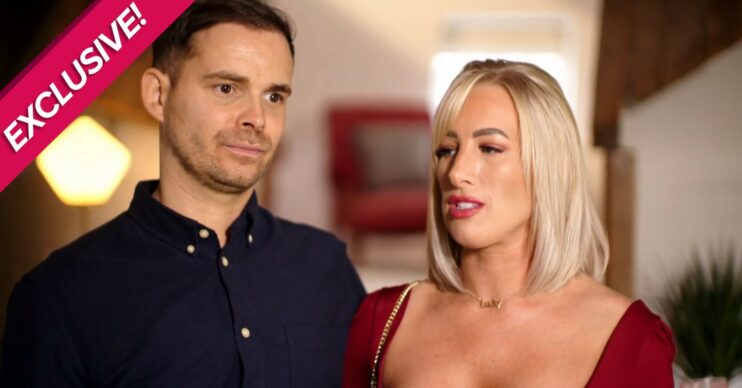 Are all the couples actually in love or looking more distant than ever?

MAFS UK couple Morag and Luke may not be “genuinely in love”, a body language expert has suggested.

The pair got married on the E4 show last week and didn’t seem to be the perfect match straight away.

Morag and Luke then went on their honeymoon to Switzerland and things didn’t go great.

However, during last night’s show, the couple appeared to be closer as they attended the first dinner party alongside the rest of the married couples.

But one body language expert has suggested they may be acting…

MAFS UK: Are Morag and Luke in love?

When asked by fellow co-star Megan whether they’re in love, Luke and Morag said: “We’re in a really good place.”

Read more: Married At First Sight UK: ‘ALL of the couples are disastrous pairings – yes, even Adam and Tayah!’

The couple sat closely together and walked in hand-in-hand.

However, body language expert Adrianne Carter told Entertainment Daily!: “Not sure this is a couple genuinely in love, although they sit close they could be acting…”

Moving on to the other couples, Ms Carter said Bob and Megan don’t seem to be loved up.

Bob and Megan sat very far apart on the sofa and she later cried after finding out most of the other couples were feeling good in their marriages.

Megan told Tayah and Bob: “It feels like all the couples are together and then there’s me and Bob.”

Ms Carter told us: “The space between them show that the distance is real.

“When Megan gets upset he does show real concern for her so there is genuine care if not love.”

Elsewhere, it seems Adam and Tayah are getting stronger by the minute after dropping the L-bomb during their honeymoon.

Last night, the couple told the other pairings that they were in love.

Ms Carter said the couple gave signs which prove their love is genuine.

She told us: “Fingers entwined when holding hands is a sign of genuine coupledom and both show this and it’s very easy and comfortable.”

The newlyweds had a very explosive honeymoon as Nikita criticised Ant’s appearance and the pair didn’t seem to have chemsitry.

During last night’s show, their differences in personalities showed through and Nikita ended up leaving the dinner following a clash with Jordon.

Ms Carter told us: “Nikita and Ant – He is embarrassed by her and determined to not let her control him.

“I don’t think this relationship will go the full distance.”

Meanwhile, Ms Carter said Amy and Josh seemed “relaxed and comfortable with each other” so their relationship may progress.

In addition, she said Franky and Marilyse also seem “comfortable with each other and enjoy each other’s company”.

Tonight’s show is the first commitment ceremony and it looks set to be explosive.

Which couples will survive and will any go their separate ways?