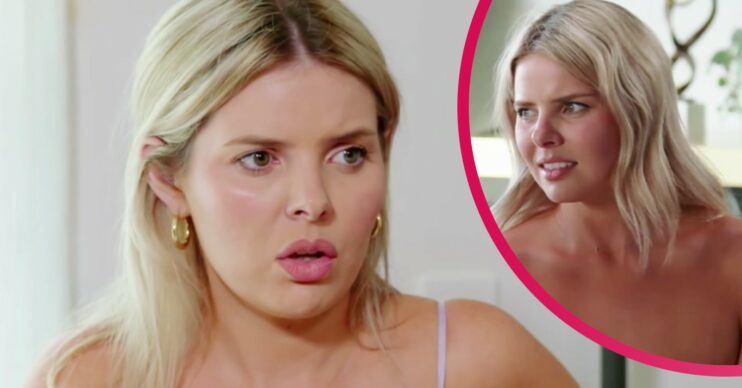 The teaching student appeared to be a complete sweetheart after tying the knot to groom, Jackson Lonie, on their wedding day.

However, Olivia has slowly become one of the most controversial characters on this year’s E4 series.

Domenica initially clashed with Carolina Santos after she critiqued her relationship with Dion Giannarelli.

But it didn’t take long for Olivia to get involved.

She told the 27-year-old to reconsider how she ‘speaks to people’ during the blazing row.

Olivia said: “It’s not a nice way to speak to people.”

Her words clearly got to Domenica, who went on to furiously smash a wine glass in front of her fellow contestants.

It followed shortly after Olivia criticised Domenica during the show’s commitment ceremony.

Speaking to the camera, she said: “I don’t know who made Dom holier than thou but she’s not the queen of everything. She’s not queen bee in this experiment because Lord knows Dom’s not perfect.”

But it appears that viewers have had enough of Olivia’s bad-mouthing ways.

How have MAFSA viewers responded?

In fact, a number of viewers have taken to Twitter to express their anger.

And we can’t really blame them!

Jackson PLEASE end it with Olivia. Turns out he’s way too good for her #MAFSA

Jackson I really like you but do not, I repeat, do not stand up for Olivia. She is VILE #MAFSAustralia #MAFSA #MarriedatfirstsightAustralia

Did anyone fall for Olivia’s fake tears? We think not!

These crocodile tears from Olivia are pathetic. Jackson saw her bitchy side for what it really is #MAFSA #MAFSAU #MAFSAustralia

Wow Olivia is utterly vile! Intentionally winding someone up to the point they break is such a horrible thing to do. She's only crying because she's been caught out showing her true colours. I feel so bad for Jackson, he's so lovely and way too good for her. #MAFSA

Despite the backlash, Olivia has provided plenty of hilarious memes over her mannerisms.

I am convinced that every time Olivia does that stupid twitchy thing it is because the devil is entering her soul #MAFSAU #MarriedatfirstsightAustralia #MAFSA #MAFS pic.twitter.com/ekEG6XzjUo

This is literally Olivia's last hinge coming off

#MAFSAUS #MAFSA why does Olivia do that horrible cocky provoking little eye and head movement?! WHY?! She’s awful, reminds me of a manipulative child pic.twitter.com/PzbGuzchFt

That annoying twitch thing Olivia does when she’s run out of arguments…#mafsa pic.twitter.com/DaBVswSRSO