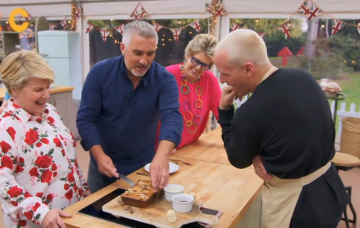 Paul Hollywood refused to eat it

Reality star Jamie Laing, heir to the McVitie’s empire, had viewers in hysterics by creating the “worst cake ever” in the Celebrity Bake Off tent.

Jamie, who has baking in his blood because his great-great grandfather invented the digestive biscuit, was ridiculed on Twitter as fans spotted he’d made a “willy” shaped decoration on his banana loaf cake.

And the inside looked so disgusting that Paul Hollywood refused to even try it, while Prue Leith discreetly spat it out.

Jamie admitted it was “absolutely vile” and joked that it looked like a pork pie.

Paul said: “That has got to be the worst cake that’s ever been baked in the tent. That’s impressive.”

Read more: Great Celebrity Bake Off viewers in hysterics at “most appalling baker” ever crowned

But the Made In Chelsea star looked on the bright side as the judges and fellow contestants fell about laughing.

He said: “In every situation, look at the positive. I’ve created a new substance no one has ever found before.”

Going into the tent, Jamie had hoped he could live up to his illustrious baker ancestor.

“It’s amazing to have history like that in the family,” he said.

“I want Paul Hollywood to go, ‘You know what? You are a star baker, you’ve made your grandfather proud’.”

But he confessed: “I had never touched flour until Sunday when I tried it for the first time.”

And it all went wrong when he decided to mix all the ingredients together at once because he had seen his mother do that.

Paul told him: “You destroy the whole cake by doing it that way.”

Jamie said: “This is nothing like my mum made it. Nothing.

“It’s like art. Some people would love that. Other people…”

Why’s Jamie drawn a penis on his cake? 😂 #GBBO

#GBBO Jamie’s made a penis cake fair play to him pic.twitter.com/aHYtU1xXKt

10 year old is def now team Jamie. “He’s just really funny Mum. He put a banana willy on a cake on tv how can he not win??” #gbbo

Did anyone else see the banana penis that @JamieLaing_UK has put on top of his loaf cake? #bakeoff #StandUpToCancer LOL!

Jamie’s great-great-grandad is turning in his grave right now. “The worst cake ever baked in the tent” 😂 #GBBO #StanduptoCancer

I am impressed Jamie did not end up poisoning everybody… #GBBO

* The Great Celebrity Bake Off continues on Channel 4 at 8pm next Tuesday.