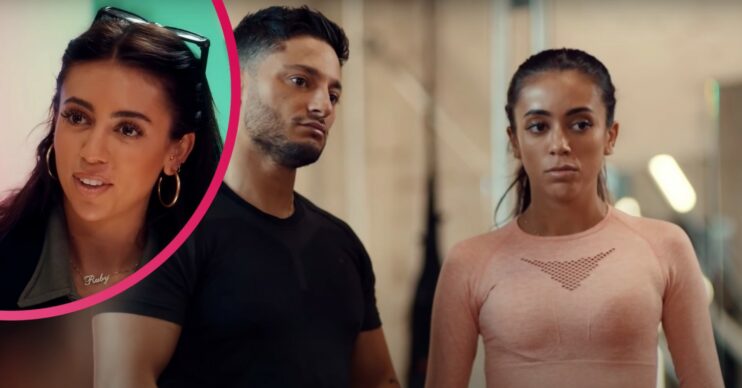 Made In Chelsea: Are Reza and Ruby still together?

Made In Chelsea viewers were in shock after last night’s episode when Reza discovered that Ruby had followed a footballer on Instagram.

Although Ruby claimed that she doesn’t know who the footballer is, Reza struggled to trust her as this isn’t the first time this has happened.

So are Ruby and Reza still together? The couple have not long been back together so more upheaval is the last thing they needed…

Reza was heartbroken in last night’s episode of Made In Chelsea after finding out that Ruby was following a random footballer on Instagram.

He explained to Ollie and Gareth Locke-Locke that he made plans with Ruby but she cancelled them for a night out.

Reza was expecting her to message him but he hadn’t heard from her in 24 hours.

But when he checked her Instagram, he was devastated to find out that she was following a random footballer.

Reza said: “I wake up in the morning and I check to see if I have a message from her, there was nothing.

“And her last seen online was at 4/3:30 am. And she’s following some footballer on Insta.”

Ollie and Gareth both persuaded Reza to talk to Ruby and find out who the footballer is.

However, when Reza confronted Ruby about her night out, their conversation didn’t go quite as he’d hoped.

Reza said: “You went out on a bender and don’t speak to me for almost 24 hours.

“Then I go on your Instagram and you’re [bleep] following a random footballer.

“Last time you did this was when you were cheating on me.”

A shocked Ruby then replied: “If I follow someone I’m not cheating on you. I haven’t done anything wrong.

Reza added: “I didn’t say I was dumping you.”

But before he could say anything else, Ruby said: “I’m dumping you.”

Are Reza and Ruby still together?

Shortly after Ruby dumped Reza, the pair realised that they didn’t want to waste their 10 year relationship for a small fight.

They both met at a party later on to address how they felt about each other.

“We should be able to move forward from this.”

Read more: Who’s in the cast of Emmerdale 2022? Meet the full line-up

Ruby then said: “Obviously I want this to work, I just need you to have a little bit more faith in me.

“And I don’t really know what anything is without trust. And I feel like you need to be able to trust me.”

Reza replied: “I want to trust you and I’ll work on that but don’t put me in a position where I’m second guessing myself or you.”

Fans are relieved that Reza and Ruby have decided to give their love another try.

But will they make it through the summer?