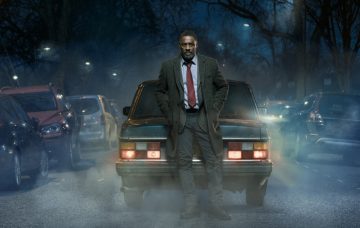 But with the good – great script, on-the-edge-of-your-seat tension, amazing cast and, well, Idris Elba – came the bad and the ugly…

A murder scene so horrifying that some viewers have vowed to avoid public transport forever!

The new four-part series hit the ground running on New Year’s Day (Tuesday 1 January), as maverick cop Luther was called to investigate the gruesome deeds of a serial killer with a sick fetish for stabbing people.

After already leaving two dead bodies in his wake, the masked assassin preyed on his next victim – a young girl alone taking a bus journey.

And this is where it got really scary.

Read more: Piers Morgan reveals Idris Elba tried it on with his wife

The killer, wearing a creepy mask and LED-lit black hoodie to confuse CCTV cameras, waited until the young girl was alone on the top deck before crawling on the floor behind her…

As she sat unaware of her impending fate, TV viewers screamed at her to go somewhere public, head to the bottom deck, run for her LIFE, but it was too late.

The man in black loomed up behind her, grabbing her from the side and stabbing her repeatedly in the neck.

As the poor girl fought for her life, a passenger on another passing bus saw the attack and desperately called for help.

Alas, it was all too late for the unlucky brunette, whose lifeless body was left on the floor of the bus while the killer made a run for it – murdering the bus driver en route.

Unsurprisingly, the series opener left many fans terrified and making a public declaration never to ride on a bus again!

One fan wrote: “1st January 2019, 9:39pm – the time the nation collectively decided never to get the night bus again.”

Another said: “Honestly speaking, that bus scene gives me nightmares. General rule of safety, if you sit at the back of the bus, your throat will be less likely to be slit by someone from behind you #Luther.”

A third said: “Never riding on a bus again unless I can sit at the back. Thanks #Luther.”

Others joked that the episode must have been “sponsored by Uber” as so many people would now be scared to get on public transport.

Never riding on a bus again unless I can sit at the back. Thanks #Luther

Was left wondering if it was just the cup of tea I had before bed that woke me in the early hours or something more sinister! Thanks @bbcluther for giving me early hours paranoia and making me too scared to look under the bed. The bus scene! 😱😱😱 #Luther

Honestly speaking, that bus scene gives me nightmares. General rule of safety, if you sit at the back of the bus, your throat will be less likely to be slit by someone from behind you #Luther

Thanks #Luther couldn't sleep as kept picturing THAT night bus scene, now feeling jumpy on an empty train even though is broad daylight but will definitely be watching again tonight !!

Just when you stopped checking under the bed, you’re now checking the floor of the bus 😭 #Luther

Things I’ll be avoiding from now on:

The crawling on the floor of the bus. #LUTHER pic.twitter.com/JcEOagxQXW

Some fans likened it to the infamous ‘killer under the bed’ scene in series three.

The episode also saw the return of Alice Morgan, who arrived on Luther’s doorstep with a tantalising “Watcha” before the credits rolled.

The series continues tonight (Wednesday 2 January) at 9pm and the next two consecutive nights.

Did you watch Luther? What did you think of the opening episode? Leave us a comment on our Facebook page @EntertainmentDailyFix and let us know what you think!