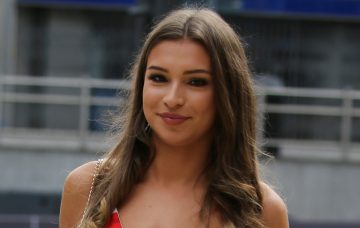 She told fans on social media

Love Island star Zara McDermott has revealed she was rushed to hospital in the middle of the night with suspected appendicitis.

The 21-year-old shared a clip to her Instagram stories on Friday showing herself led in a hospital bed with an IV drip in her arm.

Zara, who found fame on this year’s series of the reality show, explained to her fans that she has been in hospital for nine hours.

She wrote: “How’s your Friday. I was rushed to hospital in the middle of the night for suspected appendicitis… been here for 9 hours now.

“This week is not my week first my ankle then this.”

Zara then posted another clip of herself from the hospital bed showing her “favourite chocolates” her mum and dad had brought her.

But, she revealed she can’t actually eat them.

She wrote: “Mum and dad brought me my favourite chocolate but I can’t eat them.”

A rep for Zara confirmed to us that her boyfriend Adam Collard has been by her side the whole time supporting her.

Adam and Zara met on Love Island this summer and shortly after leaving the villa, they officially became boyfriend and girlfriend.

Earlier this year, Adam told OK! magazine he’s never been happier than he is with Zara.

He said: “I’ve never felt so comfortable or had a connection like this before. Zara is unlike anyone I’ve ever met.

“I’ve never had to try with Zara, but with Kendall Rae-Knight and Rosie Williams I was trying to force a connection. I got on well with them both but there was never the same sort of spark.”

In the same interview, Zara said she didn’t think her relationship with Adam was moving too fast.

“He told me he loved me a few nights after he got back and I definitely love him too. People will say we’re moving quickly but no one understands how close you get on Love Island,” she said.