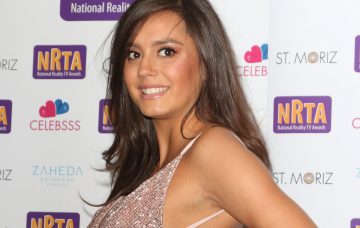 She welcomed her son on December 13

Tyla Carr has proudly shown off her newborn son Archie for the first time.

The Love Island star, who appeared on the reality show last year, welcomed her baby boy on December 13 with boyfriend Rossco Edmonds.

And now, the couple have beamed alongside their son in a beautiful family portrait for OK! Magazine.

Tyla, who fell pregnant just four months into her relationship with Ross, opened up about her high-risk pregnancy and revealed she started experiencing complications with the baby at 32 weeks.

She told the publication: “I’d been leaking fluid so they tested to see if my waters had broken and I had to go for an emergency scan.

“The nurse phoned the consultant and said: ‘I think her waters are gone. There’s no fluid and he hasn’t grown for two weeks.’

“The consultant did a scan and said, although the baby was low, he was fine. So they just decided that they’d see me weekly throughout the rest of my pregnancy.”

Tyla added that she was originally meant to have a C-section on December 20 because the baby was breech, however they brought it forward as Archie’s heart rate “was up and down”.

The reality TV star even admitted she was trying to induce the labour in anyway she could by “eating spicy food, drinking raspberry leaf tea and using my breast pump” because she was “so excited to meet him”.

Tyla said welcoming her son into the world was “overwhelming” and “the most magical moment ever”.

The couple have admitted they would love to get engaged but want to focus on Archie for the time being.

The love I have for this tiny little human being that I can call my Son is so immense! I can’t even begin to tell you how overwhelming it is to write this message, just because it’s me writing about my Son and I haven’t quite come to terms with it all yet! It’s all so crazy and happens so fast! #thankyoumidwife really is such a good cause because without these amazing people, I would have probably given up trying to breast feed and probably would have been home by now feeling a bit lost. They have been in checking on whether I need help with baby latching on and advising me to just stay another night just so that I have all round care again which is so lovely that you don’t feel like cattle or that your being rushed out ASAP. Not to mention my incredible partner @rossco188 for being the most supportive and patient man throughout. (Considering I was such a pansy throughout the whole time of me being in hospital). I’ve found a new type of love for him 😍 Can’t wait to share the next chapter of my journey with you guys! #newbaby #newborn #love #son #mother

Earlier this month, a representative for Tyla confirmed to OK! that she had welcomed her bundle of joy.

Tyla later shared the news on Instagram alongside a photo of the tot’s tiny hand wrapped around her finger.

She wrote: “The love I have for this tiny little human being that I can call my Son is so immense!

“I can’t even begin to tell you how overwhelming it is to write this message, just because it’s me writing about my Son and I haven’t quite come to terms with it all yet!”

What do you think of Tyla and Ross’ name choice for their little boy? Leave us a comment on our Facebook page @EntertainmentDailyFix and let us know what you think.