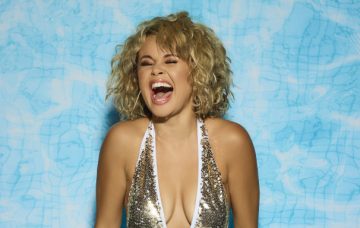 Love Island newcomer Savanna Darnell already has a claim to fame and she hasn’t even entered the villa yet!

The 22-year-old singer and dancer from Sheffield will arrive on the island in Thursday night’s episode, as part of a twist introducing a whopping TWELVE new islanders to the show.

And it means there will now be TWO islanders with famous dads!

We already know Dani Dyer’s father is EastEnders actor Danny Dyer. Now it’s been revealed that Savanna’s dad is none other than American singer and songwriter August Darnell, also known as Kid Creole.

Read more: Love Island’s Zara Q&A: “I’ll wait for Adam on the outside”

You may recognise some of his biggest hits such as Annie, I’m Not Your Daddy, which reached number two in the UK chart back in 1982.

Other songs include Tropical Gangster, Stool Pigeon and I’m A Wonderful Thing, Baby.

Savanna, meanwhile, has also had her own brush with fame in the past, as she’s revealed: “When I was a baby I was on the packaging of a nappy brand. My face was everywhere!”

She’s admitted being a bit nervous about entering the villa as she’s a “people pleaser” and doesn’t like the idea of someone not liking her.

Addressing what she wants to find in the villa, she said: “I think I’m looking for a guy that I can be myself around. I want someone I can have a silly time with. I love the thought of having an amazing experience with a guy who comes on the journey with me.”

“The best way to win my heart is making me laugh,” she said. “If you can make me laugh then let’s get married now! I love having silly time with a boyfriend, just being ourselves. He can be the fittest guy ever, but if he can’t make me laugh, there’s no point.

“You need to have great chat, banter, and a great personality. I’m really into activity dates – something fun. I’m very competitive though, so depending on what it is it could lead to an argument quickly!”

Are you excited about twelve new islanders arriving?  Leave us a comment on our Facebook page @EntertainmentDailyFix and let us know what you think!