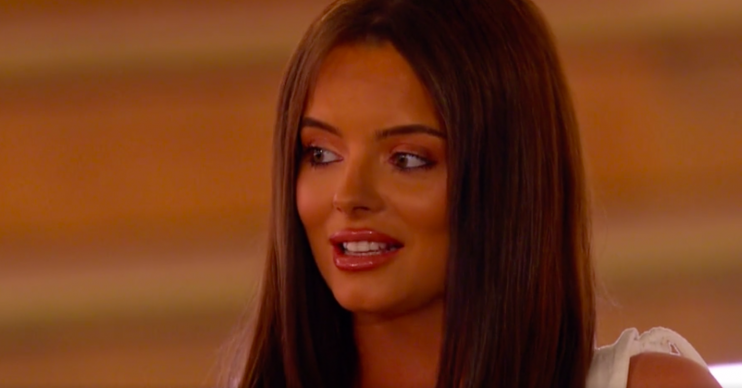 She loves to throw in a curveball

Curtis is currently coupled up with Amy Hart but it all went downhill when he admitted he was going to ditch her for new Islander Jourdan.

Tonight, Curtis will break Amy’s heart even more when he admits: “I don’t feel the romantic connection so I don’t feel like it’ll work in the long run.”

And that’s not all because the preview for tonight’s episode has also revealed Maura admitting she fancies the Latin Ballroom dancer despite being coupled up with Marvin.

Maura admits to Lucie that Curtis is “Obviously gorgeous. He’s very manly and I love that. He’s funny. He’s the whole package for me.”

Maura also says that “there have been so many times where I want him to teach me how to dance.”

The likelihood of something happening is a possibility now he’s single and when Maura first entered the villa, Curtis admitted he tried sliding into her DM’s… so you never know?

This very unlikely coupling came as quite a shock to Love Island fans and they took to Twitter to discuss it.

One tweeted: “Nothing – I mean NOTHING – would make sense about Maura fancying Curtis.”

Another person wrote: “‘He’s just so manly’…… Curtis???? LOOOOOL Maura don’t think we are talking about the same person”.

Maura cracking on with Curtis #LoveIsland

Me remembering Curtis actually slid into Maura’s DM’s before the show #loveisland pic.twitter.com/2UpkGgO5uE

GUYS. WHAT IS GOING ON?
Maura likes Curtis? We know Curtis finds Maura attractive and who wouldn't like her personality…
Is this actually going to happen or are the producers teasing us??#loveisland pic.twitter.com/pWhjmsmExz

Me trying to figure out if Maura is after Curtis from just that preview: #LoveIsland pic.twitter.com/fTqSzwdcqC

The news is unlikely to go down well with heartbroken Amy.

The question is whether this random new couple is for real… what will Amy think of one of her closest friends wanting the man she loves?

Do you want Maura and Curtis to get together? Leave us a comment on our Facebook Page @EntertainmentDailyFix and let us know what you think.