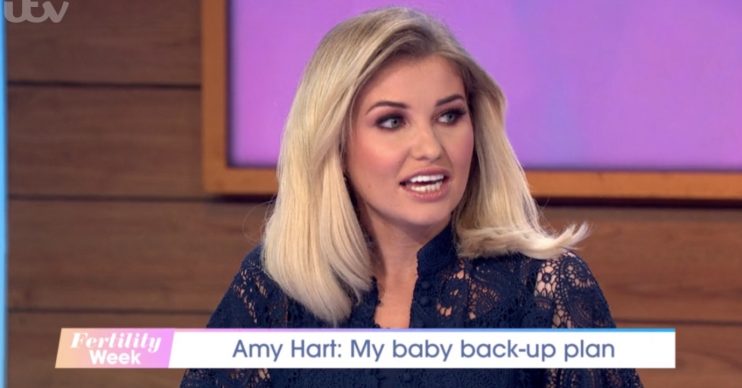 Former Love Island star Amy Hart has revealed that she has a ‘baby back-up plan’ after receiving some bad news during a fertility check-up.

Amy, 27, explained on Friday’s episode of Loose Women (17 January) that she’s going to freeze her eggs as a precaution.

Speaking to the panel, Amy revealed that during a recent ‘fertility MOT’ an internal scan showed that while her eggs were of ‘good quality’, her AMH levels were low.

AMH levels are an indicator of how long a person will remain fertile for and could be a sign of early menopause.

Both Amy’s mother and auntie also went through an early menopause.

On receiving the news Amy took the decision to freeze her eggs, which involves 10 days-worth of injection under general anaesthetic.

After discussing the issue, the panel asked her if she should ‘calm down about having kids’.

I’d love to meet someone, get married, have kids naturally.

“I’d love to meet someone, get married, have kids naturally,” she responded. “Fine. That’s my dream idea.

“But if that doesn’t happen, I’ve got my insurance policy.”

She also added that she wouldn’t ‘live my life by whatever man I meet’ and plans to go ahead with the procedure in March.

He then began a relationship with Maura Higgins.

Before the shock departure, Amy was left in tears at the break-up, and was said to be ‘heartbroken’.