The Geordie lass, 22, has become the face of fashion website MissPap in a tie-up said to be worth £1million.

Amber is believed to have been working with the brand on a six-month collaboration that will start with the launch of her first ever clothing line, due to land next month.

So what’s the T? 🐸☕️ @makeupbymikey

Amber said of the deal, as reported by MailOnline: "I am so happy to be joining the new MissPap family and to be a part of the fresh MissPap brand."

Her range will encompasses sizes six to 26 and, according to Amber, embody her "fashion sense, fun, sexy and easy".

She continued: "Since leaving Love Island everyone has been waiting for me to announce my clothing collection but I wanted to take my time in the design process to make sure everything is perfect for girls of all shapes and sizes.

"My collections will feature a range of going out, gym and lounge wear mixed with essential day time bits too."

Oh hey it’s just me your NEW MISSPAP babe💅🏾💕 I honestly cannot believe it!! Soooo excited to be a part of the fresh Miss Pap brand💗 It’s been a long anticipated announcement by me and I’ve been dying to tell you all However I wanted to take my time in the design process so my collection is perfect, embodies my style and more importantly is inclusive for girls of all shapes and sizes I cannot wait for you to see what I’ve been working on you know it’s going to be GOOOD For now here’s my discount code huntys AMBER50 👑✌🏾 #misspapped #ad

Amber quickly became a fan favourite in the 2019 series of Love Island, where she initially struggled to find romance before coupling up with fellow islander Michael Griffiths.

But they split when the scouser moved on to newcomer Joanna during the Casa Amor segment, leaving Amber heartbroken.

I am so happy to be joining the new MissPap family.

She eventually found happiness with Irish hopeful Greg O'Shea and they stunned viewers by winning in the final, beating more established couples like Tommy Fury and Molly-Mae Hague.

But last week, it emerged that Greg had split with Amber via text message.

Amber later confirmed the break-up on Loose Women, telling her fellow panellists: "From my point of view I still wanted to make it work. There was a call a few days before just chatting, not specifically to do with that and then definitely on that day it was a text. 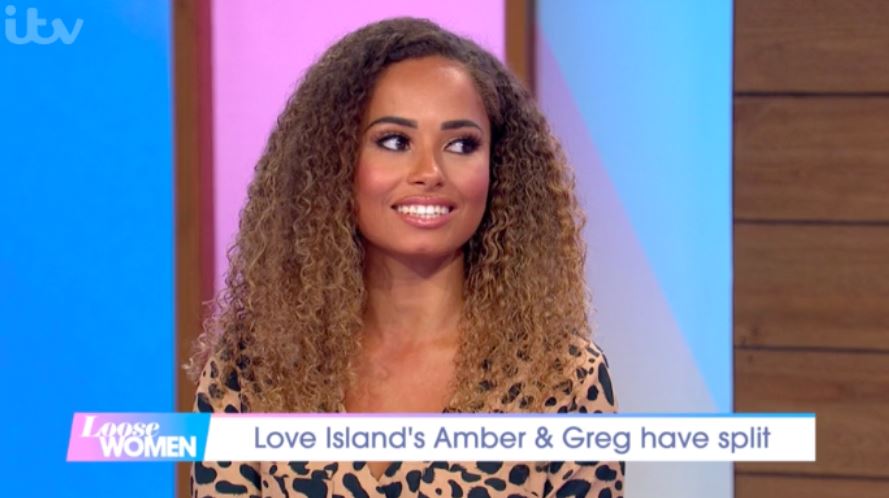 Amber spoke about the break-up on Loose Women (Credit: ITV)

She's since moved in with her Love Island co-star Anna Vakili, who was her closest pal in the villa.