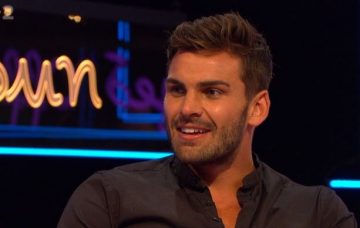 Viewers did NOT see this coming!

The 22-year-old made the surprise admission on Sunday night’s spinoff show, Aftersun, after he was reunited with Zara following his shock dumping last week.

Adam raised eyebrows earlier in the series when he ditched partner Rosie Williams, 24, in favour of newcomer Zara, 21, but was left single when Zara was then dumped.

He chose to recouple with newcomer Darylle Sargeant, 24, – while Zara watched from home – but it wasn’t right, as he told Darylle he still had feelings for Zara.

Adam was dumped in a shock twist last week, leaving him free to pursue his romance with Zara outside the villa – and in a surprise confession on Sunday night, he said: “I won the show too early when I met Zara. I do love her.”

There were cheers and claps from the studio audience, which, rather awkwardly, included Adam’s former flame, Darylle!

Adam added; “The problem is I won the show too early when I met Zara. That’s it. But I do love her.”

When Caroline clarified, “Are you both in love?”, Adam replied, “100 per cent”, while Zara coyly said: “Yeah!”

Adam added: “I don’t know what it is about Zara, but she’s amazing. I can’t even put my finger on it but I know there is definitely something.”

His confession certainly caused a stir on Twitter as well, with many viewers thrilled he and Zara had found their happy ending.

Others said they did NOT see his L-word bombshell coming!

I completely believe Zara tamed Adam. I see him in love with her and I ship it. #loveisland #loveislandaftersun

So Adam and zara are in love!!! Ngl that is actually the cutest thing I've ever seen😂😍 #LoveIsland #adamandzara

#LoveIslandAfterSun #LoveIsland #aftersun adam omg… I miss him in the villa. Him telling Zara he loves her….sweetest thing ever. @theadamcollard

was not expecting Adam to say he was in love with Zara, wow what a cutie. My mind has changed on Adam 😁 #LoveIsland

Others, however, were less convinced….

Ahead of their live appearance on Aftersun, both Adam and Zara had been pre-recorded having a somewhat awkward first reunion back in the UK.

Adam had admitted being “apprehensive” about seeing Zara as there were things he needed to prove to her.

In emotional scenes, Zara told Adam she felt she’d “lost him” when he coupled up with Darylle, and said it had been incredibly difficult for her watching him kiss Darylle and have fun in the villa when she was hurting back home.

Zara said she “felt humiliated in front of the whole nation”, while Adam apologised profusely and said he just wanted to be with her.

Adam said he’d been “really stupid” in what he did but also, it made him realise how much he missed Zara.

Adam even said he wished he’d quit the show and left when Zara did!

Meanwhile, Adam also admitted feeling bad about kissing Rosie less than an hour after breaking up with Kendall Rae Knight, saying he probably should have spoken to Kendall, although he also felt she knew, like him, the romance wasn’t going anywhere.

As for Rosie, he said they got on well but there was a spark missing.

He admitted he could have been a bit more “sensitive” towards Rosie’s feelings, but also felt he hadn’t been that open about his feelings for Zara or said anything that would make Rosie feel he liked Zara.

Of course, Aftersun host Caroline Flack quizzed Adam on why he rolled his eyes when Rosie tearfully told him how much she liked him.

Adam replied: “With that situation, the conversation was a lot longer than what was on the episode. It was cut down. I wasn’t laughing at Rosie being upset, I wouldn’t like to see anybody upset and we all have a massive bond, like family.

“I wasn’t laughing at Rosie being upset, it was more because the conversation went on so long I couldn’t get a word in edgeways. She was speaking at me and I didn’t have a chance to defend myself or explain the situation.

“I can totally see why people are getting upset but I didn’t intentionally try to upset her and it wasn’t nice to see her upset.

“As much as me and Rosie had our differences, I wouldn’t want to see anyone upset.”

Are you happy that Adam and Zara have found love? Leave us a comment on our Facebook page @EntertainmentDailyFix and let us know what you think!