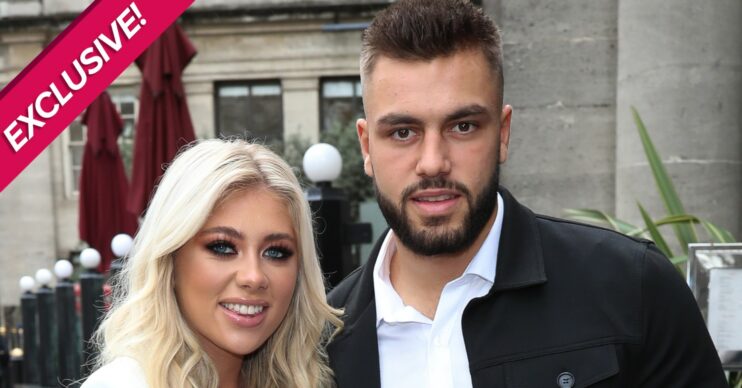 The former Islanders went on to win the show’s winter edition, before swiftly moving in together during the pandemic.

But as the new series of Love Island gets underway, what do Paige and Finn make of this year’s Islanders?

Here, Entertainment Daily! speaks exclusively to the pair to get the gossip of everything villa life and beyond…

Love Island: What did Paige and Finn say?

Just like many of us, Paige and Finn are keeping up with this year’s series.

Finn, 21, added: “Hugo is definitely our favourite. On the argument he had with Sharon and Faye, I can see where the girls are coming from.

The lack of sleep was definitely a big thing for me.

“But I can also see why Hugo was a little bit baffled to why it got so heated. You can sorta get both sides of the story.”

Meanwhile, the couple know exactly what the new Islanders are going through.

Paige explained: “It’s not a normal set up and you’re cut off from the world, not knowing the normal time and living with strangers. Your emotions are all heightened when you’re in there.

“If you watched, you would have seen I snapped at a few people. The lack of sleep was definitely a big thing for me.”

In addition, Finn said: “Definitely! As much as on TV you think we’re just sunbathing, the emotional side of things is so intense. It tires you out.”

So, who do they think is playing a game?

Finn told us: “I don’t think anyone is playing a game. There’s certainly some couple that are quite established.

‘It’s not a show you can sail through’

“I think people can take a little longer than others and it gets mistaken for playing a game. At the end of the day, if no one in there is your cup of tea, you’re going to try and stay in there for as long as possible till someone comes in.”

“I agree with that,” Paige went on, adding: “I don’t think you would go in there and play a game on a show like that.

“The producers are so good with the twists and turns. It’s not a show you can sail through.”

But while the current Islanders may be protected on the show, they’ll have to face real life soon enough.

However, Paige and Finn are certain they’ll be prepared – and have even offered their own support!

The Scottish lass shared: “I think all Islanders from every series have had to deal with it. I think they’ll be very well prepared from Love Island, and they’ve got a great support team to help them deal with that change.”

Paige and Finn offer their support

Former footballer Finn said: “When we came out of out series, we had ex Islanders messaging us and giving us the heads up on different things.

“I’m sure Paige and I will do the exact same for the new Islanders.

“We’ll want them know what it’s like and let them know that everyone is here for them for support if they need it. But I’m sure everyone will be fine.”

Nowadays, Paige and Finn appear to be stronger than ever.

Since departing the villa, the two have moved into a new apartment in Manchester.

But they’re still coming to terms with the change.

Finn explained: “When you’re in Love Island, you’re in a bubble and not living in the normal world. Then you come out to face real world problems, like council tax and apartment viewings. The acceleration of our relationship has been crazy and that’s been the craziest thing.”

I see marriage and kids in my future

However, they won’t be pressured into taking the next steps – such as engagement and starting a family – anytime soon.

Paige insisted: “No, I don’t think we should be pressured into feeling anything like that or to take the next step. We just take life as it comes and do what’s right for us.”

In addition, Finn said: “We want to life a bit and when it’s right we’ll start looking at the next stages.

“I see marriage and kids in my future, but I don’t want to put a time on it. It’s whenever it feels right.”