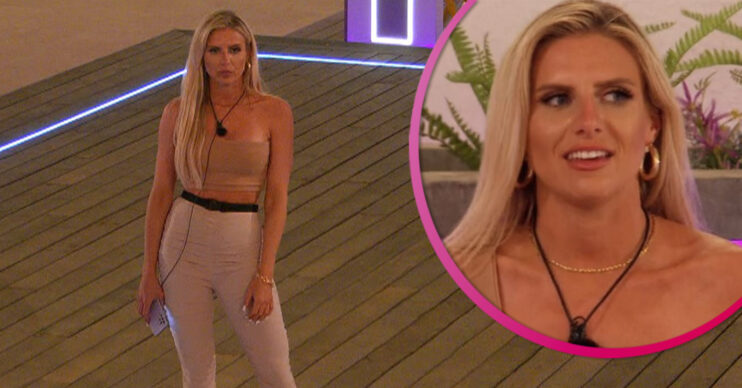 One girl will leave tonight...

Love Island spoilers reveal that tonight the villa will be hit by its first eviction. But who will go?

On Wednesday night’s show, Chloe Burrows will choose which boy she wants to couple up with.

As the new bombshell, Chloe gets first pick of the guys which means one girl will be dumped from the villa.

Last night, Chloe received a text which said: “Chloe, the time has come for you to choose which boy you want to couple up with.

“All the Islanders must now gather around the fire pit.”

Tonight, Chloe will make her decision as she stands in front of her fellow Islanders.

Chloe reveals who she wants to couple up with as the girl who’s left single receives a text.

The message tells her she has been dumped from the villa.

But which boy did Chloe choose and which girl will be leaving already?

Meanwhile on tonight’s show, things seem to be progressing for Kaz and Toby as they embark on their first date.

Toby receives a text which says: “Toby and Kaz, it’s time for your first date. Get ready to leave the villa. #SheShoots #HeScores.”

The date takes place at a beautiful location by the sea.

Kaz asks Toby: “Obviously, you play football. Tell me more about that. What position do you play?”

Toby replies: “I’m down the wing.”

Kaz admits: “My football knowledge is not great. All I know is there is a ref, a keeper and a substitute bench.”

Toby then jokes: “I’m there sometimes as well, chilling.”

However, things later move onto them as a couple.

Toby asks: “On the outside if I said second date?”

Kaz says: “Would I come? On the outside, yeah I’d say yes to a second date.”

Will these two be the show’s first official couple?!

Episodes are available the following morning on BritBox.

Who’s your favourite couple? Leave us a comment on our Facebook page @EntertainmentDailyFix and let us know.