The love birds were taken by surprise when they received an early morning text informing them they would be whisked out of the villa for their final date.

They were taken to a field where a hot air balloon awaited them, but as it began to inflate, viewers spotted something slightly odd.

Read more: Jack has a big question to ask Dani

While many gushed over the romantic date, others were shocked to see the word “flights” spelt “fligths” on the side of the balloon.

As the balloon began to inflate, the company’s phone number along with the words “balloon fligths” was printed for all to see.

It wasn’t long before viewers spotted the spelling error and took to Twitter to share their thoughts.

One person said: “I can’t get over they spelt “FLIGHTS” wrong on the balloon – I would not trust it hahaha.”

“Please tell me I’m not the only one to notice they spelt ‘flights’ wrong on the hot air balloon,” another tweeted. 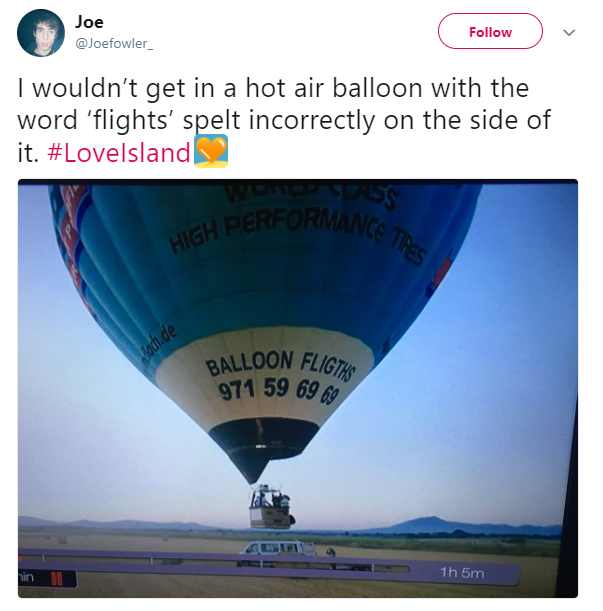 Despite the spelling error, the couple enjoyed the date and it gave pen salesman Jack the perfect opportunity to ask Dani a big question.

As they admired the incredible views around them, the pair reflected on their eight weeks together in the villa.

The couple then landed back on the ground to enjoy a picnic on the grass.

Discussing their future together, Dani spoke about the obstacles they will face on the outside.

It suddenly dawned on Jack that, with distance being a possible complication, at this point neither has one another’s phone number!

Biting the bullet, Jack asked his girlfriend to move in with him once they leave the villa!

Dani told Jack: “You have been the best boyfriend I could ask for” to which Jack replied: “I have never loved anyone like this before.

“You are that girl who has changed me. I have got something I want to ask you. It’s the next logical step for us.

“When we leave here will you move in with me?”

Dani was clearly excited by the prospect of taking the next step with Jack as she replied: “Of course I will!”

Upon their arrival back in the villa, Dani reflected on the date in the Beach Hut.

She said: “For a boy to actually just sit there and look at a future with me just means so much to me and that’s everything I could ask for.

“The fact that I’ve got that here in Love Island is like ‘wow’.”

Who do you want to see win Love Island? Leave us a comment on our Facebook page @EntertainmentDailyFix and let us know what you think.