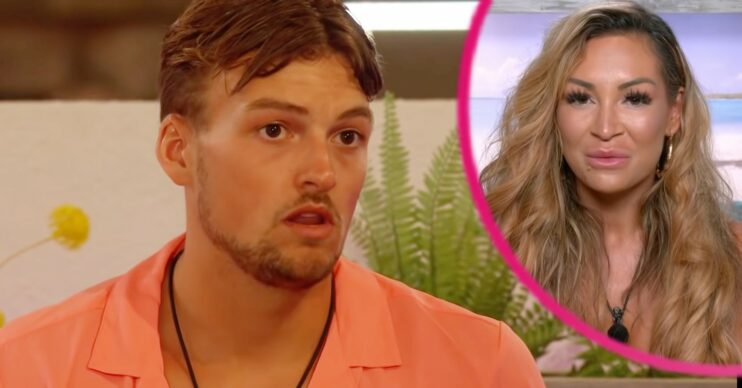 'He does not deserve to be on that Island!'

Despite being one of the original Islanders, the PE teacher is yet to find love in the famous villa.

And fans of the ITV2 dating series are fed up with his antics!

Hugo found himself coupled with AJ after she chose him earlier this week.

At the time, he looked far from impressed with his new pairing.

But last night, Hugo came clean about his feelings towards the hair extension technician.

He told AJ: “At the beginning, there was something I couldn’t quite put my finger on, and I thought the more we got to know each other, the more time we spent together, I might be able to kind of figure out what it was.

“But, at the minute I just see that you and I are better off as friends on that front.”

The teacher then went on to encourage AJ to move on with Danny Bibby.

He continued: “I genuinely think that you and Danny could have something really great. I think you guys bounce off each other.

“It would be rude of me and wrong of me to just float through this and do ‘you and I’ and take it slow when I’m not 100 percent into it.”

However, the chat didn’t sit well with viewers at home.

Viewers demand Hugo is ‘removed’ from the villa

Many believe the PE teacher has served his time on the show.

Taking to Twitter, one ranted: “LOL Hugo needs to be removed at this point #LoveIsland.”

A second complained: “Hugo needs to be forcefully removed from the premises at this stage. No chemistry with nobody. Come home then love. #LoveIsland.”

Hugo needs to be forcefully removed from the premises at this stage.

No chemistry with nobody. Come home then love.
#LoveIsland

Another wrote: “Can someone please tell me who is saving HUGO when he does not deserve to be on that Island?!? All he ever does is friend zone every girl!”

A fourth shared: “Hugo bores me because how were you complaining the entire time that no one wants you and then when someone finally wants you try set them up with someone else #LoveIsland.”

In addition, another raged: “Omg Hugo is giving up AJ to Danny. What is wrong with this man? He couldn’t do it with Sharon, now AJ. Who the hell is he waiting for?”

Hugo needs to be removed at this point

Meanwhile, others praised the teacher for being honest with AJ.

They added: “I love how Hugo handled the ‘talk’ with AJ. Complete respect for him not wanting to hold her back. #weallneedahugo.”

A second agreed: “All these mean tweets about Hugo. If he doesn’t like anyone in there he can’t force it. At least he was honest with AJ and didn’t keep leading her in just to be in a couple. Maybe a girl will come in that’s right for him.”