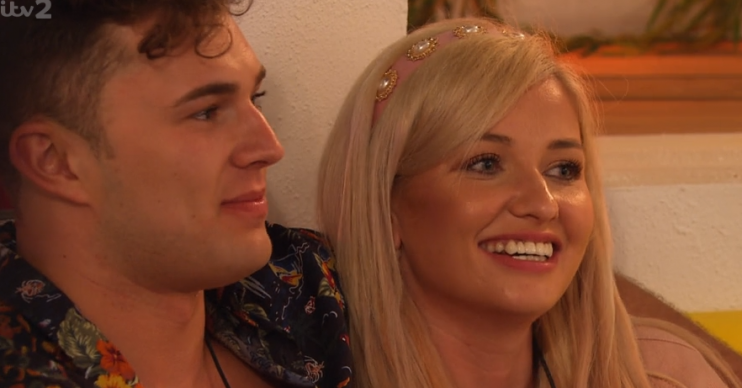 The pair are growing closer by the day

Despite only being four days into the new series of Love Island, fans have already called their winners.

The pair seem to really like each other as Amy gushed over his “sunny” personality.

Speaking in the Beach Hut, she said: “Curtis is such a lovely person and the word I use is sunny. He is such a sunny person. He lights up all the rooms he goes into.

“I really fancy Curtis. He’s got a really beautiful little face and a really good body. So, win-win.”

The pair were seen sitting at the firepit sharing a cuddle and Curtis admitted he was going to go in for the kiss but deciding not to last minute.

Curtis said in the Beach Hut: “I took her aside tonight. I was going to try and give her a cheeky little kiss but the circumstances were completely wrong. It did not go to plan at all.”

However, things started looking up for him as Amy told her fellow female islanders that she was going to “instigate the snuggle” that night.

As the islanders settled down for the night, Curtis and Amy were seen cuddling and sharing a smooch.

The next morning, Amy spoke to the girls about her kiss with Curtis.

She said: “Obviously we did kiss, it was really nice actually. It wasn’t like one of us had to instigate it, we just knew it was going to happen. It just happened.”

Speaking to the boys, Curtis also said: “Had a little cuddle and a cheeky little kiss.”

Speaking in the Beach Hut, he said: “It was good waking up this morning. Things seem to be going on the perfect track with me and Amy. For me, it feels quite strong.”

Viewers were left melting over the couple and have already called the pair their winners.

One person wrote on Twitter: “Curtis & Amy for the win even though it’s early #loveisland,” while another said: “Curtis and Amy to win.”

A third added: “Saying it now, Curtis & Amy for the win #loveisland.”

Curtis & Amy for the win even though it’s early #loveisland

saying it now, curtis & amy for the win #loveisland

Curtis & Amy are so bloody cute, can see them going a long way #loveisland

Do you think Curtis and Amy could win? Leave us a comment on our Facebook page @EntertainmentDailyFix and let us know.