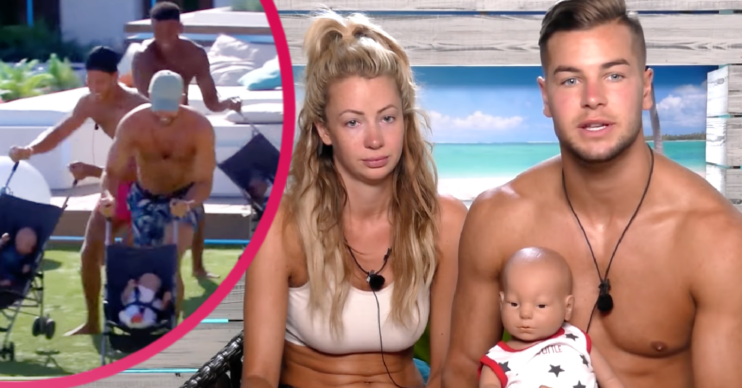 Love Island: Top five funniest moments from the baby challenge as it returns

Prepare for some tantrums and not just from the plastic dolls!

For those who aren’t familiar with the ITV2 dating series, the Islanders are tasked with the responsibility of looking after plastic dolls.

And the hilarious episode has birthed some standout moments over the years.

The baby doll became something of a national treasure as the challenge aired.

At one point in the episode, Chris even became emotional as he spoke about his love for his son.

During series four, the boys proved they were far from responsible parents.

The group – including Jack Fincham and Dr Alex George – cared for the tots while their partners left the villa for a girls’ trip.

However, the boys decided to race their kids in their buggies across the length of the garden.

The game ended in disaster, with Alex injuring himself and crushing his plastic baby in the process.

Meanwhile, Josh Denzel’s baby was left with one arm during his time as a dad.

He left his fellow Islanders in hysterics after accidentally pulling baby Prince’s arm straight out of the socket.

Not long after making Anna his girlfriend, the pair split after Jordan set his sights on India Reynolds.

As a result, she refused to take part in the challenge and left Jordan to tackle fatherhood alone.

In the beach hut, Anna said: “I don’t want a baby with him. I don’t know whose baby that is, because it’s not mine. He probably doesn’t even know whose baby it is himself.”

The pair were joined by their toy dolls during a quick gym session.

At one point, Luke T even used a bench press whilst his baby was strapped to his chest.

We’re pretty sure that wouldn’t happen on the outside!