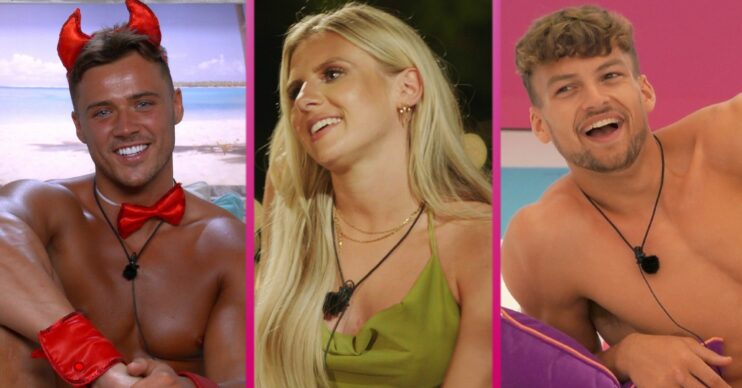 Love Island tonight: Hugo rejected by Liberty as Brad and Chloe get close behind Faye’s back

Love Island viewers are in for a treat as the show returns to screens tonight (June 29).

The ITV2 reality series kicked off on Monday, with a series of sexy singletons joining the famous villa in Mallorca.

But what should fans expect from the Islanders this evening?

Viewers will know the show ended on a twist last night, as Chloe Burrows confirmed her arrival.

The stunning blonde left a voice message for the boys, saying: “Hey boys, how are you? Chloe here.

“I’ve just arrived and I’m outside the front of the villa. I’d like to take you all on a date but I’ll let you guys decide who wants to come and join me.”

And it appears ALL of the boys are interested in getting to know the marketing executive.

During tonight’s show, the boys decide to join Chloe on the date.

Toby tells the girls: “Me and the boys have decided. Chloe’s a new girl. She’s all alone outside. So, we’re going to decide to welcome her in by all of us going and not just choosing one person to go.”

Brad and Chloe get close

Meanwhile, Brad is keen to know who Chloe has her eye on.

On the date, he says: “Out of the five lads here, has anyone caught your eye?”

You’re all really handsome and nice to look at

“You’re all really handsome and nice to look at so I can’t complain but I don’t know any of you.”

However, she’s later hit with the news that she has 24 hours to couple up with one of the boys.

As a result, her decision will leave another girl single.

Later on, Chloe and Brad continue to get to know each other.

Speaking one-to-one, he says: “For me, it’s more of who I can be comfortable around. I would say I’ve got good conversation but I haven’t got what I would class as chat like a salesman.”

But who will Chloe pick?

Furthermore, the Islanders take part in their first challenge of the series.

The devilish challenge sees each person revealing their sauciest secrets.

Toby shares a kiss with Chloe during the task. However, he’s later rejected by Liberty.

Love Island continues tonight at 9pm on ITV2 and ITV Hub. Episodes are available the following morning on BritBox.