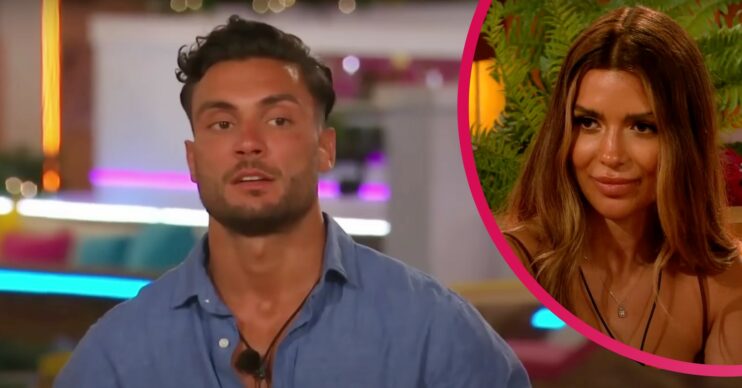 Davide’s Love Island journey has only just started, but he’s already been involved in plenty of drama.

He only coupled up with Gemma Owen on Tuesday night, and yet it looks as though his head has been turned already by the two new bombshells who entered the villa last night (Wednesday, June 8).

So, what will happen in tonight’s show? Read on to find out more!

Last night’s show saw Davide and Gemma head out on their first date together.

More dramatically, however, it saw two new arrivals in the villa – bombshells Ekin-Su and Afia.

And judging by his reaction to their arrival tonight, it looks like Davide is a fan of the two new girls.

Speaking in the Beach Hut after Ekin-Su and Afia rock up, Davide says: “Wow, wow, wow – the two new girls are fire.”

Later in the show, things heat up between Davide and Ekin-Su after she teases him with a seductive dance move, followed by a kiss on the cheek.

“Who else would I want to be rubbing my booty against, you know, the nice little eight pack!” Ekin-Su says in the Beach Hut later.

Is Gemma concerned about Davide on Love Island?

Ekin-Su and Afia’s arrival definitely ruffles a few of the girls’ feathers too.

Discussing their arrival, Gemma says: “I am confident in myself. I know what I want and nine times out of ten, I do get what I want but this could be the one-time difference.”

Amber seems on edge, saying: “I am still happy to get to know them, I am not going to be a [bleep], but be a [bleep] to me and you ain’t gonna get the nice Amber, a storm is about to begin.”

Later in the show, Gemma decides to get to know one of the other boys in the villa – namely Luca.

“I am attracted to you, I definitely would want to get to know you,” she tells him during a chat on the rooftop.

“You stare into my eyes and I just want to stare into yours!” he replies.

What else happens on tonight’s show?

Elsewhere on tonight’s show, Liam is out on not one date, but two – as he is the first boy to try and win over the new girls.

Prior to his date, Liam says: “It’s a massive booster, definitely what I needed, I am buzzing now, I can’t wait to meet the girls.”

During their date, Liam tells Afia that she is 100% his type.

Meanwhile, on his date with Ekin-Su, the flirting is there right from the start.

“You’ve got really nice eyes, the colour of the sea, almost like you can kind of swim in it and get lost,” she says to him.

“Are you getting a bit lost?” he playfully asks. “Maybe I am,” she replies.

Elsewhere, Indiyah opens up about her feelings for Ikenna, realising that perhaps she does like him more than she thought.

Love Island airs tonight at 9pm on ITV2 and ITV Hub. Episodes are available the following morning on BritBox.