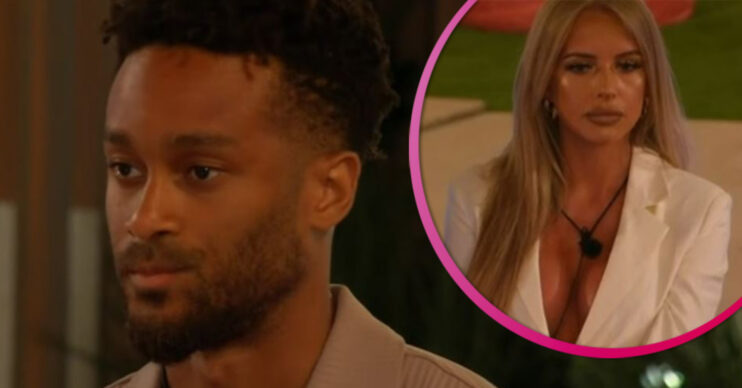 Love Island: Teddy picks Faye to couple up with as Rachel is sent home

New guy Teddy had to make the decision!

Love Island star Teddy Soare chose Faye to couple up with, meaning Rachel has been dumped from the villa.

Teddy recently arrived in the villa and he had to choose a girl to couple up with.

During tonight’s show, the Manchester hunk had to make his decision.

Who coupled up with who on Love Island?

Jake was up first and chose to couple up with Liberty, who he said was him “with a wig on”.

Next up was Liam who picked Millie, saying he wants to “see how things go and progress”.

Toby then made his choice, choosing Chloe.

Next up was Brad as he chose Lucinda to couple up with.

Aaron then made his choice, deciding to couple up with Kaz so she had the chance to meet somebody she likes.

Hugo made his decision next and he coupled up with Sharon as friends.

Finally, new boy Teddy then chose which girl he wanted to couple up with.

He chose Faye as Rachel was sent home.

Love Island viewers shared their thoughts on Twitter, with many baffled by Teddy’s choice.

One person said: “Like there’s literally no connection between Faye & Teddy.”

Another commented: “Teddy and Faye have zero chemistry.”

Another wrote: “There’s zero chemistry between Faye and teddy I don’t know who they’re trying to fool.”

A third added: “I feel like Faye has had too much opportunities, Rachel only had one and she’s gone.”

When we all thought Faye was going but Teddy picked her over Rachel #LoveIsland pic.twitter.com/O5cPo5rnmE

However, others think Teddy made the right choice.

One tweeted: “I actually really like Faye, one of the least boring people in there.”

Another said: “So glad Teddy saved Faye. I disliked her to start with, but she’s grown on me lately.”

One commented: “I’m glad that Faye is still there because she makes it entertaining but feel sorry for Rachel.”