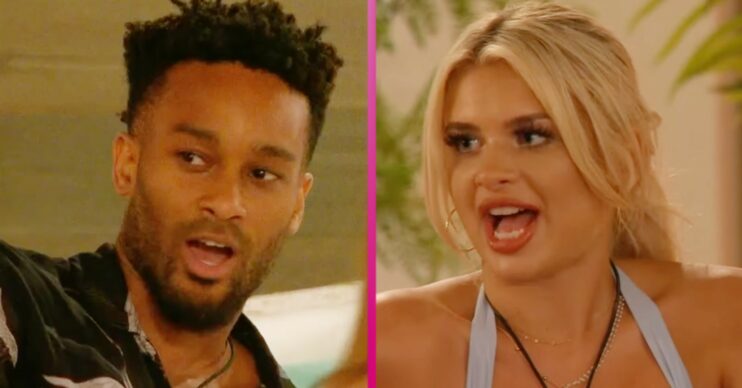 Love Island: Viewers’ reactions to Liberty interrogating Teddy is the moment we’ve been waiting for

The Manchester hunk started his villa journey on the ITV2 show by heading on dates with four of the girls.

But it was Liberty who was really keen to grill the Love Island newbie.

What happened to Teddy on Love Island?

During last night’s show, viewers watched on as Teddy dated four of the girls.

Kaz Kamwi, Rachel Fenni, Sharon Gaffka and Faye Winter were all picked to join the hunk on a date.

And the financial consultant went down a treat.

Following their date, Kaz admitted: “I just went steady with Teddy, it was like the villa gods were listening to me.

“I better have made a good first impression!”

In addition, Rachel added: “Obviously the claws are going to come out, we’re competing for this guy.”

While the girls appeared mesmerised by the hunk, Liberty took it upon herself to find out if he was a good match.

“If you like a girl would you take the slow approach or the fast approach? Do you like Quality Street or Celebrations?”

Fans of the show were left in hysterics over the moment.

One said: “Liberty asking Teddy that hard-hitting question is the journalism we need in 2021 #LoveIsland.”

A second shared: “Liberty asking Teddy if he prefers Quality Street or Celebrations is incredible #LoveIsland.”

Liberty grilling Teddy is the best thing to happen 💕🌴 #LoveIsland

A third wrote: “Liberty grilling Teddy is the friend we all need.”

Another added: “Liberty doing a whole DBS check on Teddy for her girls #LoveIsland.”

A fourth shared: “Liberty rooting for Teddy & Kaz is what we love to see!”

Liberty grilling Teddy is the best thing to happen

Another called it a stand out moment of the series.

They said: “Liberty grilling Teddy is the best thing to happen #LoveIsland.”

A second agreed: “Liberty interrogating Teddy because the girls forgot to ask questions on their dates is the best thing ever, the only person I really like in the villa.”