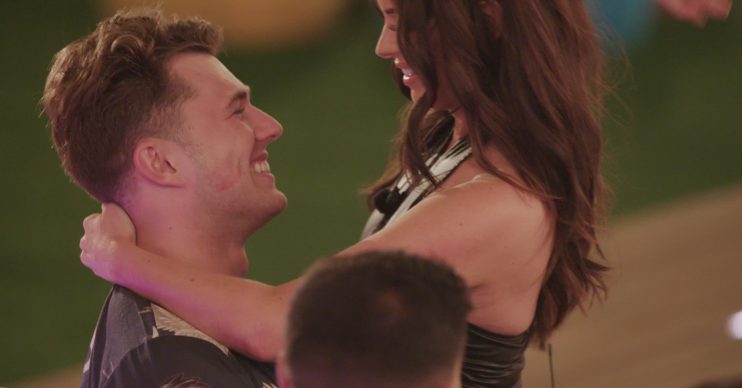 Maura makes her move on the dancer

Maura Higgins will kiss Curtis Pritchard in tonight’s episode of Love Island, just hours after his ex Amy Hart decided to leave the villa to nurse her heartache.

Curtis and Maura have grown closer since he split from Amy and, now Amy has left the villa, Maura has wasted no time in making a move on her crush.

She makes her feelings clear to Curtis as they play a saucy game with their fellow Islanders tonight.

Molly-Mae receives a text and she reads out: “Islanders, tonight you will get each other’s hearts racing in a boys vs girls challenge. #dirtydancing #bringontheflutters.”

Maura then reveals her plans to turn up the heat with Curtis. In the Beach Hut, she confesses: “I’ve got a bit of a plan up my sleeve. I just can’t wait to get to Curtis!”

The boys and girls go head to head as they are strapped up to heart rate monitors and perform a dance routine for each other.

It will then be revealed which boy got which girl’s heart racing the most and vice versa.

And Maura makes an extra effort when it comes to her dance for Curtis. She ups the heat and seizes the opportunity by locking lips with him.

After the pair smooch, Curtis is left looking rather impressed.

The professional dancer then returns the favour when it comes to his performance for the ring girl.

As Curtis dances with Maura, he suddenly picks her up and plants a kiss on her lips, too.

All the girls go wild for his dance and Amber later admits in the Beach Hut: “Curtis gets a ten out of ten from me!”

Their steamy exchange comes after Amy told Curtis she was leaving the villa so they could both move on and have space.

Do you think Maura and Curtis make a good couple? Leave us a comment on our Facebook page @EntertainmentDailyFix and let us know.