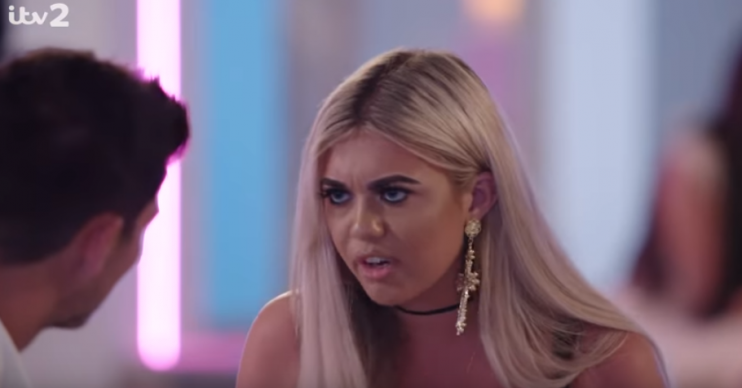 Love Island SPOILER: Belle and Anton in furious row over his behaviour

He also kisses another girl in a challenge

Love Island’s Anton ends up in a row with Belle tonight as he makes a confession.

Earlier this week, Anton shocked viewers when he gave a shop assistant his number as he, Tommy and Jordan went shopping to pick up ingredients to cook dinner for the girls.

After Tommy dropped the bombshell to Molly-Mae that Anton slipped his number to the cashier, Anton decides to admit to the truth in tonight’s episode.

Sitting down with Belle, Anton admits: “I think I should tell you something…”

A concerned Belle says: “Nothing good ever comes from that sentence…”

Anton tells her: “You know what I’m like, I’m just jokes all the time… We got to the till [in the supermarket] and the cashier – we were joking – she gave me the receipt and I gave her my number.

“I thought it was funny at the time… I thought I’d rather tell you. I didn’t think it was a thing. It was a joke… It was a stupid thing to do.”

Belle starts to question Anton about whether this is something he would do when he leaves the villa.

Anton then tries to reassure Belle, but she seems concerned.

Belle later confides in Joanna. She says: “Do I not deserve more than that?”

Meanwhile, Anton is speaking to Curtis on the swing seat: “I was trying to give Anna a kiss, a peck, then I was going to say something really nice about Belle [when I was choosing her to marry] and then she did that to me.

“She made me look so stupid, I’m hurt, I’m not even annoyed, I’m hurt that she could do that to me.”

Later at a party, Belle tells Anton: “Everyone thinks you’re wrong but you, that’s the truth. You’ve mugged me off, you’ve embarrassed me, you’ve made me feel like [expletive].

“I’ve pretty much cried in front of you and you’ve not even asked, ‘are you okay?’.”

As Anton gets up and walks away, Belle shouts: “That’s all you do is walk away because you don’t want people to think you’re a bad person.