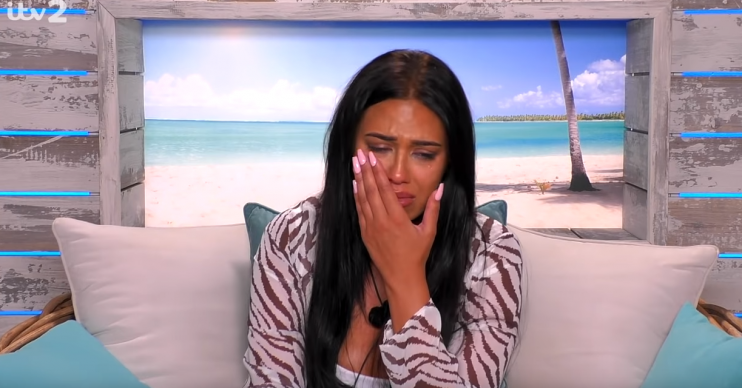 Is their romance coming to an end?

Love Island’s Anna Vakili breaks down in tears tonight as her romance with Jordan Hames is on the rocks.

Last night’s episode saw Jordan admit his feelings for India Reynolds days after asking Anna to be his girlfriend.

Anna kicked off and lashed out at Jordan, calling him a “[bleeping] idiot”.

But on tonight’s show, Anna struggles to contain her emotions and bursts into tears.

After her rant at Jordan, Anna confides in the girls who rush to her side to support her.

Breaking down in tears, she says: “I said yes to him [to be his girlfriend]. It’s been two days, and look what he’s done in front of my face.

“This is a nightmare,” as Belle hugs her.

Speaking in the Beach Hut, a teary Anna says: “Why can’t I be that girl that comes in here and finds someone that really likes me and wants to treat me well?

It’s kicking off in every direction as a devastated Anna’s heart breaks over Jordan, and Maura has it out with Curtis. The drama continues as the Islanders wake up to parenthood, and a dumping strikes the villa… 😬#LoveIsland pic.twitter.com/nl1VESAAG8

“Why do I have to be the girl that comes in here and gets tricked into a relationship? Why can’t I be the other girl?”

The rest of the Islanders then become aware that Curtis advised Jordan to tell India how he felt.

Speaking with the girls in the lounge, Anna says: “I’m never talking to Curtis again.”

That night, Maura sleeps outside on the day beds with Anna.

Anna tells Maura: “I’m so grateful that you did that for me.”

The next day, Anna awakes and wants to put the drama behind her.

Anna keeps her distance from Jordan but is keen to confront Curtis as she feels he didn’t consider her feelings when he prompted Jordan to tell India how he felt.

Later in the evening, Jordan calls Anna for a chat.

He tells her: “First of all, I want to apologise for what happened last night. I should have had a conversation with you first before speaking to India.”