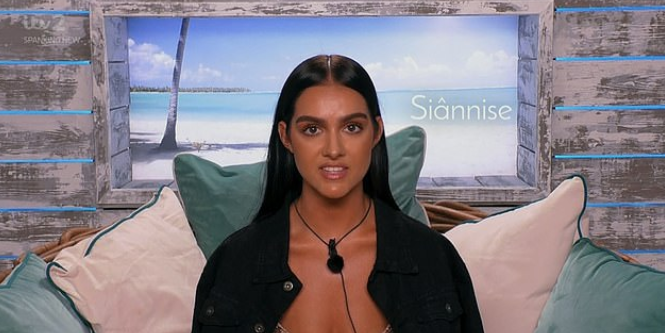 Ofcom has received complaints from Love Island viewers who were convinced Siânnise Fudge said the N-word on the show.

During Friday night’s episode (February 7), Shaughna Phillips confided in the girls after being dumped by Callum Jones for new girl Molly Smith.

As the girls gathered around to comfort a tearful Shaughna, viewers thought Siânnise had used the offensive term.

Rebecca Gormley told Shaughna: “You said to not go with a scaffolder. I think now you know.”

Siânnise said something in the background and viewers were convinced she said: “Date [expletive].”

No one said — and nor would we broadcast — the word in question.

However, ITV addressed the speculation and insisted the Bristolian actually said: “They ain’t no good.”

They added: “Viewers are mistaken. No one said — and nor would we broadcast — the word in question.

“We strongly refute any suggestion to the contrary.”

According to The Sun, 62 viewers complained to Ofcom over Siânnise’s comment.

One viewer told the publication: “I couldn’t believe it. I paused and rewound the show so I could listen again and it was there clear as day.”

Earlier in the series, Siânnise had sparked outrage among viewers after she called fellow islander Nas Majeed “Aladdin”.

During the launch episode, the brunette told host Laura Whitmore: “He’s lovely. As well, I love Princess Jasmine and he kind of looks like Aladdin.”

Nas seemed chuffed with the comment, adding: “Don’t even do that to me, I’m actually gassed.”

But some viewers weren’t impressed and shared their thoughts on Twitter.

One person said: “Turned on #Loveisland to see the one Asian already be referred to as Aladdin.”

A third tweeted: “How she calling him Aladdin on national television? Nah I’m calling OFCOM.”

Turned on #Loveisland to see the one Asian already be referred to as Aladdin pic.twitter.com/ReZhCOaaBO

How she calling him Aladdin on national television? Nah I’m calling OFCOM #loveisland