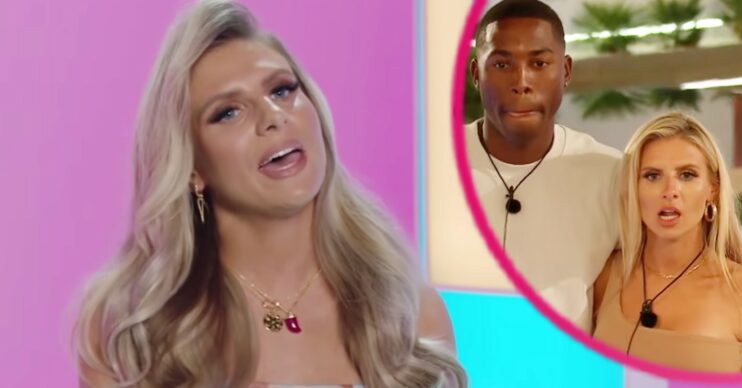 All the latest gossip from the villa...

In latest Love Island news, Chloe Burrows’ family have pleaded with trolls after being sent hundreds of death threats.

The 25-year-old rustled feathers as she entered the villa earlier this week.

However, the attention has seemingly become too much for the star’s family.

In a statement shared on Instagram, Chloe’s family addressed trolls after receiving a series of death threats.

Furthermore, they also received disturbing messages from viewers claiming they wanted to “kill themselves”.

“We hate to introduce ourselves under such vile circumstances but we’ve had enough after just 3 episode.

“We all have thick skin but the amount of trolling Chloe has been receiving is absolutely disgusting. This morning we woke up to yet another DM (see next story) encouraging Chloe to kill herself – there have been HUNDREDS.”

In addition, the statement read: “Have the deaths of Sophie, Mike, and Caroline taught us nothing?

“Not only that, but people are flooding her inbox threatening to kill themselves. People… this is a GAME show, there is a cash prize!

“We understand the frustration surrounding @shannonsinghh’s eviction we feel it too! She didn’t deserve to leave so early but Chloe does not deserve to DIE because Shannon had to leave the villa! She will have had no idea of the repercussions of her decisions prior to making it.”

Have the deaths of Sophie, Mike, and Caroline taught us nothing?

The statement ended with the family pleading with fans to “be kind”.

They concluded: “We are not naive. We know that this post won’t put an end to trolling.

“All the advice we get is to ‘ignore it’ and ‘block the trolls’ sometimes it’s not that easy. Our hope is that this just reminds some of you #BeKind.”

Following last night’s brutal dumping, Amy Hart has revealed Shannon may still be on the show.

The reality star, who appeared in the villa in 2019, dropped the huge hint on Twitter.

Amy said: “Shannon will get her phone back tomorrow… so if she’s not on her insta in the next few days she’s obvs in another villa.”

Meanwhile, Brad and Kaz are currently bookies’ favourites to win.

According to BetMinded, the hunky singleton is a firm favourite at 2/1, while loveable Kaz has odds of 5/2.