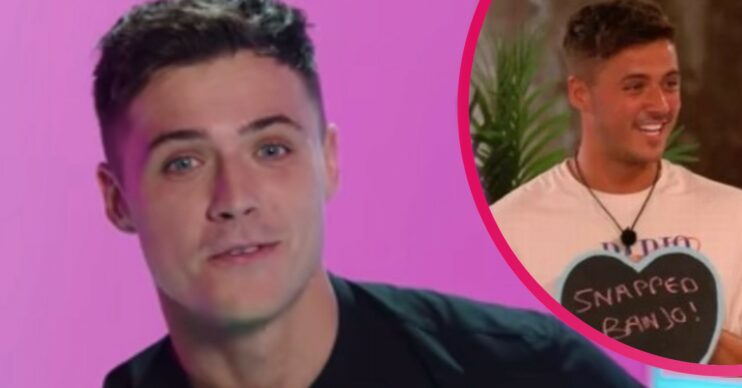 In the latest Love Island news, contestant Brad McCelland has admitted he once injured his penis during sex.

The reality star, 26, said the accident occurred during a particularly passionate bout of thrusting.

Speaking on Love Island’s Unseen Bits, he made the stunning admission.

In the previously unaired scene, Brad was asked to write down on a heart-shaped chalkboard his “most embarrassing sexual tale”.

To which he chalked: “Snapped banjo!”

Love Island news: How did Brad break his penis?

The labourer went on to explain: “One thrust of the hips and it was like, ooh, what has happened?”

However, he didn’t go into much further detail. And it remains unclear if he required hospital treatment.

According to the NHS, a broken penis is possible, but relatively unusual.

On their website, they explain: “If the penis is violently twisted when erect, it can break. There are no bones in the penis, but the tubes that fill with blood during an erection can burst.

“Blood pours out of them inside the penis and causes a very painful swelling.”

And it also states that men are often too embarrassed to seek medical advice, especially as the accidents typically occur as a result of sexual activity.

Their official website goes on to claim: “Damage during sex, where their partner is on top, is responsible for about one-third of all cases.

“The breakage usually occurs when a man’s penis slips out of his partner and is violently bent.”

What else is going on in the villa?

Meanwhile, Brad doesn’t seem to having much luck with newcomer Lucinda Strafford.

Brad and Lucinda shared a kiss, but she’s already having regrets.

Speaking to fellow contestant Faye Winter, she said: “I still really like Brad.

“I don’t know, sometimes I think to myself, does the conversation really flow?

“I think I might leave it… See how it goes, you know?

“I really regret snogging him. It wasn’t built up or anything, we got a bit too greedy. We just met each other.”

When is Love Island back on?

Love Island continues at 10pm on Sunday July 11 on ITV2.

But it will return to its regular slot at 9pm weekdays from Monday.