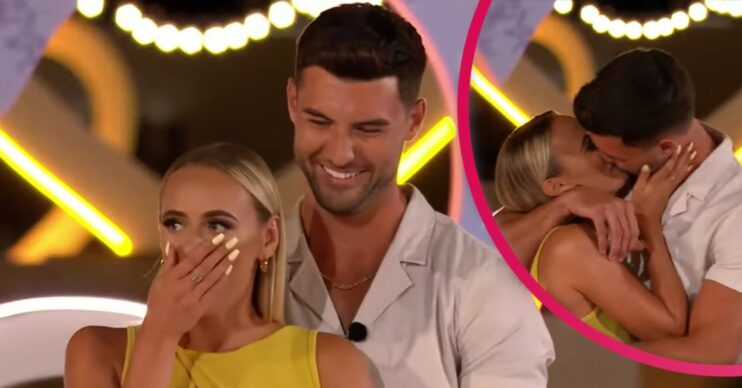 The couple became boyfriend and girlfriend

They may have bagged themselves £50,000 by winning Love Island 2021, but Millie Court and Liam Reardon had viewers on the edge of their seats for a very different reason.

The smitten duo sat down for a chat with host Laura Whitmore before the big reveal on Monday’s (August 23) finale.

After eight weeks of love, drama, tears and emotional outpourings viewers couldn’t quite believe their eyes as it appeared Liam was proposing to Millie.

Liam and Mille on Love Island

But it seemed at the time the lines of communication had just been blurred. He was actually asking the leggy Essex babe to be his girlfriend.

However, body language expert Judi James has now claimed that Liam definitely had an engagement on his mind.

She told Metro: “I thought that’s a moment they missed on Love Island and I thought the producers will be kicking themselves this morning because what I saw was Laura said, ‘have you asked her to be your girlfriend?’ which is rubbish because they’ve been sharing a bed for seven weeks now.

“They got it in the wrong order, after I love you, asking her to be your girlfriend. That would be pretty pants.”

Judi then confessed to believing that Liam’s true feelings towards Millie have him very interested in marrying her.

She said: “Laura went on to propose marriage and I thought, ‘this will be interesting’ and he was all over it. Immediately Liam was looking, making eye contact, ‘Well I’ve been thinking…’ Would he say ‘I’ve been thinking about it’ if it was just making it ‘my girlfriend’? It doesn’t work at all in my mind.”

And Judi admits it wasn’t just some confused viewers who thought Liam was making a big proposal. She believes Millie was also thinking her new beau was popping the question.

Read More: Love Island stars who have proven not winning the show can be more lucrative

She explained: “I think that’s what she thought as well, but somehow it all got lost and that’s a pity because I thought that’s where this show is going. I had my hat!”

Meanwhile, some of the former stars are now married.

Jess Shears and Dom Lever tied the knot in 2018 after appearing on the show in 2017. They also have a son together.

Nathan Massey and Cara De La Hoyde tied the knot in 2019 after winning the show in 2016. They have two children together.

Finally, Olivia Buckland and Alex Bowen got married in 2018 after their appearance on the show in 2016.