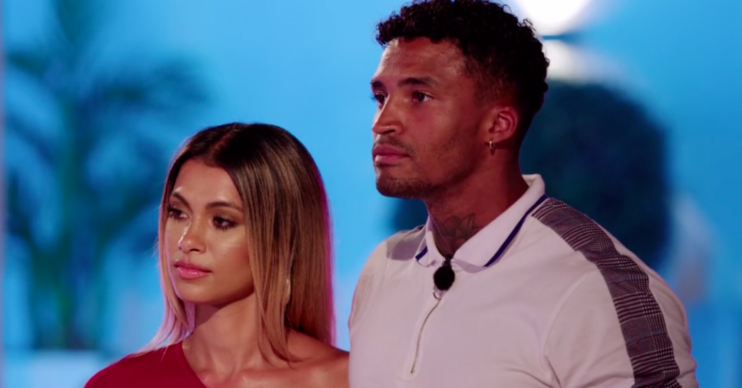 Some fans accused producers of fixing the show

They’ve been one of the most divisive couples on the show, and now Love Island fans are going mad over the shocking news that producers are splitting up Michael Griffiths and Joanna Chimonides.

Sunday’s explosive episode of the ITV reality show saw the contestants brought together by presenter Caroline Flack for the announcement of a surprise twist – that a public vote had left Michael and Joanna, as well as Anna Vakili and Jordan Hames, vulnerable.

Caroline then told the rest of the group they could only save one couple. After much discussion and debate, it came down to a tie, with Molly-Mae Hague and Tommy Fury holding the deciding vote.

The lifeline was handed to on/off pair Anna and Jordan, leaving Caroline to tell Michael and Joanna they couldn’t stay on the show as a couple.

The episode ended with the news that one would be leaving. Joanna looked crestfallen, while Michael laughed.

Viewers went wild over the shocking end to the show, sharing a lot of mixed emotions. One divided fan wrote: “HOW COULD YOU LEAVE US ON THAT CLIFFHANGER?! YOU EVIL EVIL PEOPLE! 😂 I really don’t like Michael but I kinda hope Joanna goes, for the drama. 🤷 #LoveIsland x.”

Michael and Joanna have just been dealt an extremely tough hand. #LoveIsland pic.twitter.com/Ct2hwZwL9W

Another declared: “I am actually fuming how set up #LoveIsland is this year. Of course Michael is in the bottom two, of course Joanna will be sent home and of course Amber and Michael will be ‘allowed’ to like each other again.”

Another said: “Guys are you watching this lol I’m an absolutely fuming with Caroline she is an absolute melt.”

One added: “Joanna and Michael are gonna go home and I’m fuming.”

A few more called it a fix, with one slamming: “Talk about an insult to our intelligence 😂😂 biggest fix ever.” A second said: “So fixed, can’t work out why Chris was up the last time but not this time? Well I can, they needed to keep Maura & Curtis in.”

Many also slammed Michael’s reaction – which saw him giggling and smirking throughout the announcement. It followed the firefighter scolding his previous partner, Amber Gill for doing that exact thing during awkward moments.

One quoted back what he’d said to Amber, tweeting: “This is the face of a man who is… (say it with me)… CHALDISH #loveisland.” Another added: “Why is he laughing? Childish.”

Many Amber fans were delighted, with one tweeting: “Amber, sis… enjoy every single second of this babe! You deserve it.”

Others offered up predictions about what could happen next, with one tweeting: “Okay so hear me out, Joanna goes home, Michael falls in love with Amber, they win and then Amber takes the the £50k for herself and then says ‘dead ting’ x #loveIsland.”

Another suggested they would both go, writing: “Hope Micheal and Joanna leave together just to prove to people they are strong and the Love Island producers have done them dirty and that he actually likes Joanna and not Amber.”

This was some intense telly. We can’t wait to see what happens on Monday’s show when it returns at 9pm on ITV2.

Are you glad to see these two split up? Leave us a comment on our Facebook page @EntertainmentDailyFix and let us know what you think.