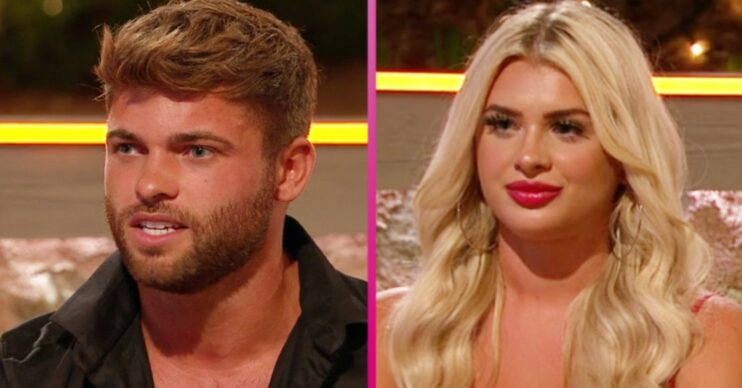 The pair recently called time on their seven-week romance

Now, an expert has revealed what the pair were really feeling during their Aftersun reunion last night (August 22).

What happened on Love Island: Aftersun?

During last night’s edition of the Love Island spin-off, Jake and Liberty reunited for the first time.

It came days after the pair left the villa after splitting.

And it appears that the spark between the pair has well and truly gone.

Darren Stanton told MyBettingSites and ED!: “Right from the start of the Aftersun interview as the pair walked out on to the set, it was clear the relationship was pretty non-existent.

“No eye contact, Jake hung back a little and let Liberty take the lead.”

The expert added: “But as the interview gets into the grittier questions, Jake begins to lick his lips – which says to me a shift in his emotions. He is very uncomfortable and it’s clear he also doesn’t want this interview to continue.”

But what did Darren make of Liberty’s body language?

Darren explained: “During the interview Liberty hardly moves position. This is not really normal behaviour for a person, who will naturally shift their posture and position if sat down for some minutes.

“I feel she’s doing her best to control her emotions and she very much has her shutters up.

“She says the sentence, ‘I did love him’, which clearly indicates past tense and demonstrates that this relationship is not going to go anywhere now that they have left the villa.”

Speaking about the Nandos waitress, he continued: “She’s also very uncomfortable by the questions. I noticed three or four red flags in her behaviour.

“She looks down to the right which means she’s had a shift in emotion, and she also touches her face which is a self reassurance gesture.”

Jake ‘flashed an expression of anger’

During the chat, host Laura Whitmore went on to ask a series of hard-hitting questions about Jake’s intentions.

She also grilled the water engineer over whether he could have fought harder for Liberty.

And it appears that the question didn’t sit well with Jake.

Darren said: “He flashes an expression of anger and his face goes very red, which is a response called flight or fight where blood is pumped to the face. He also then does what’s called a chin thrust.

“This gesture signifies anger and a dramatic shift in emotion. Jake has never made this gesture before which is why it is so significant, so it was his way of showing he is frustrated with the questioning.”

Will Jake and Liberty remain friends?

But while the pair have seemingly remained civil over the split, Darren predicts they won’t maintain a friendship in the future.

The expert concluded: “I think Jake feels like he has been played by Liberty and therefore I do not think there is any kind of relationship or indeed a friendship that exists for the pair in the future. I think Jake now feels betrayed.

“He is also supposed to be a ‘nice guy mate’, but from viewing the show he’s clearly quite a manipulative and self-serving person.