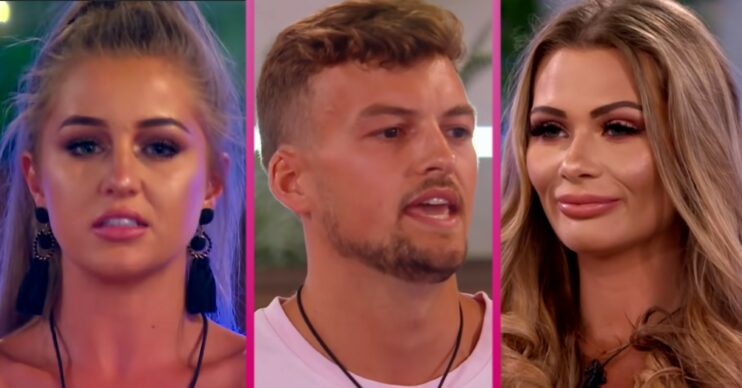 Love Island: The most dramatic recoupling moments after Hugo turns on Toby

They all sent shock waves through the villa

Love Island is known for its dramatic moments – but who could have predicted Hugo Hammond’s fiery rant as he turned on Toby Aromolaran last night?

The teacher ripped into the semi-pro footballer as he chose to dump Chloe Burrows on the ITV2 show.

But while viewers may still be shocked over the scene, the series has provided us with plenty of tense fire pit moments in the past.

In a shock twist of events, Hugo blasted Toby over his treatment of Chloe last night (July 22).

The former couple previously hit it off following his short-lived romance with Kaz Kamwi.

She doesn’t deserve to be treated how she has been

During the explosive recoupling, Hugo said: “If I’m completely honest, she doesn’t deserve to be treated how she has been this past 24 hours.

“And I firmly believe that a lot of this test stuff is complete [bleep]. You deserve someone who is honest and communicates with you and who knows what could happen.”

Shaughna Phillips provided one of the show’s most iconic catchphrases, as she reunited with Callum Jones after Casa Amor.

The scaffolder hit it off with Molly Smith in the infamous second villa, leaving Shaughna single.

As the trio came face-to-face for the first time, Shaughna reacted: “Congrats Hun.”

However, it isn’t all bad as Callum and Molly are still very much together now.

We guess everything happens for a reason.

Meanwhile, the nation were on the edge of their seats during Amber Gill and Michael Griffiths’ reunion.

However, Amber chose to stay loyal to him.

But it was his brutal recoupling speech that really caused a stir amongst the Islanders.

The villa descended into chaos, with Michael swinging his drink around while calling Amber “childish”.

Georgia Steel was known for her loyalty during Love Island series four.

However, she didn’t receive much in return after being dumped by Josh Denzel.

The stunning brunette was left heartbroken after he returned from Casa Amor with new girl Kazimir Crossley.

Despite appearing a little teary, Georgia quickly composed herself before tackling the situation face on.

Speaking about his decision, Josh later said: “Do I feel guilty about the fact I’ve made Georgia sad? Absolutely.

“Do I feel guilty about the decision I’ve made to couple up with Kaz? Absolutely not.”

Furthermore, things got heated between Jonny and Theo on the show’s third series.

Proving he wasn’t afraid to step on a few toes, new boy Theo chose to couple up with Tyla.

But Jonny was far from impressed after the athlete snatched his girl.

As Tyla made her way over to Theo, she stopped in front of Jonny and kissed him.

Later on, Jonny said around the fire pit: “The person I would like to couple up with because I wasn’t given a lot of choice because of a giant [bleep].”

Watch the moment below.