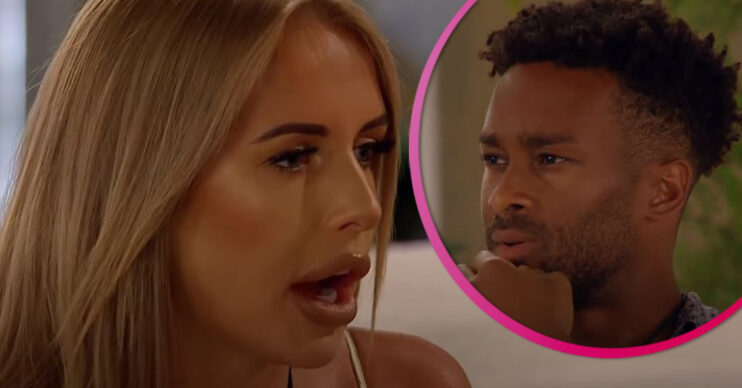 Love Island: Faye Winter’s family breaks silence amidst calls for her to be axed

Faye lashed out at Teddy over his Casa Amor antics

The family of Love Island star Faye Winter have spoken out amidst calls for her to be axed.

Faye has had a turbulent few days after a row with Teddy Soare over his behaviour in Casa Amor.

She lashed out at Teddy and branded him a “two-faced [bleep]” after seeing footage of him admitting he was sexually attracted to Clarisse Juliettè.

Two Islanders will be dumped from the villa tonight (August 9) and some viewers have called for it to be Faye despite her being saved from the public vote.

What did Faye Winter’s family say about the Love Island calls?

A statement shared to Faye’s Instagram page, which is being run by her family, said: “We understand that fans of Love Island have opinions on Friday night’s episode.

“While we don’t want to comment on the events of the show, we ask everyone to remember:

“You are watching a highly edited TV show which is created for entertainment – you can never see the full picture.

“Faye is human, she may not always get things right.

“There are human beings managing the islander’s social media pages who will be seriously effected by your comments.”

It continued: “We ask that everyone please remembers this before commenting or messaging.

“We make no apology for turning off comments, blocking and deleting to protect the mental wellbeing of ourselves and Faye when she comes out.

“We would encourage anyone struggling to do the same.”

In conclusion, her family said: “We hope that we can all get back to enjoying the show together from now on. Love team Faye.”

Meanwhile, during her row with Teddy, Faye accused him of lying about his time in Casa Amor.

It came after the footage of Teddy and Clarisse having a conversation was shown to the Islanders during a movie night.

However, Teddy pointed out to Faye that he remained loyal to her in the other villa and slept on the day beds the entire time.

After the clash with Faye, Teddy appeared visibly upset in the Beach Hut as he asked: “How am I the bad guy here? Someone needs to tell me.”

Viewers weren’t happy, with some even complaining to Ofcom.

What happened during last night’s episode?

During last night’s episode, host Laura Whitmore told the contestants that two of them will be leaving.

Kaz, Abi, Mary, Jake, Dale and Tyler were voted the least favourite Islanders and therefore at risk of being  dumped.

However, some viewers wanted Faye to be dumped from the villa.

One person said on Twitter: “Faye needs to leave quickly.”

Another added, “How did Faye not get one of the fewest votes?” while another said: “Faye needs to leave please.”

Who do you think will go? Leave us a comment on our Facebook page @EntertainmentDailyFix and let us know.