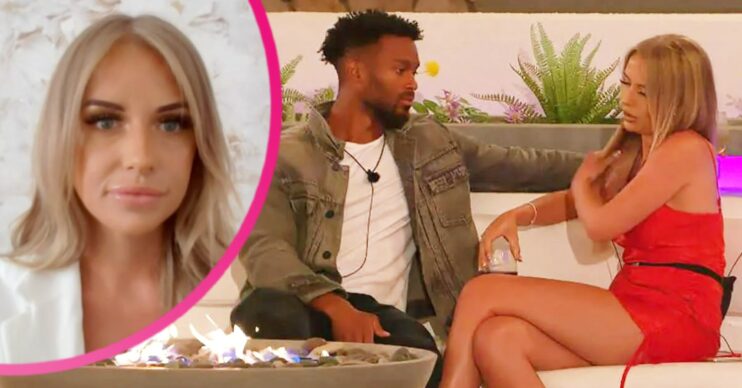 Love Island: Faye ’embarrassed’ over Teddy row as she reveals plans to move in together

She received almost 25,000 Ofcom complaints over her behaviour

Love Island star Faye Winter has admitted she’s ’embarrassed’ after lashing out at Teddy Soares on the ITV2 show.

The reality couple appeared on the Lorraine earlier today (August 27) for their first joint interview.

During the chat, host Christine Lampard grilled the couple on their heated villa moments.

On the show, the pair came to blows following Casa Amor.

Meanwhile, Faye also lost her temper after being voted the least compatible couple by her fellow Islanders.

However, the reality star is yet to watch the moments back herself.

Speaking to Christine, Faye admitted: “I actually haven’t watched it back. We were living it, we were in the moment, we know exactly what happened.

She added: “We’re over it now as a couple, it made us stronger and we’re just looking forward to the future. It’s such shame it’s been such a big part of the show.”

He said: “We understand each other so I understand why she’d be annoyed receiving the postcard.

“It’s a surreal moment that would never happen in real world.”

Despite their rocky romance, the couple are looking forward to moving in together.

“The future for us is really bright.”

Meanwhile, it comes after viewers complained to Ofcom over Faye’s behaviour.

The argument between Faye and Teddy sparked almost 25,000 complaints.

Commenting on the complaints, ITV’s Director of Television, Kevin Lygo, said: “I’m not so much worried about how many complain as what they are complaining about.

“The ratings go up when there is a bit of conflict and it is an area where you have to take a bit of editorial judgment.”

He continued: “I think generally speaking they get the tone right, people do shout at other people, as long as it’s not physically threatening, it’s not too inflammatory, it’s okay. But for some people, it might have stepped too far.”