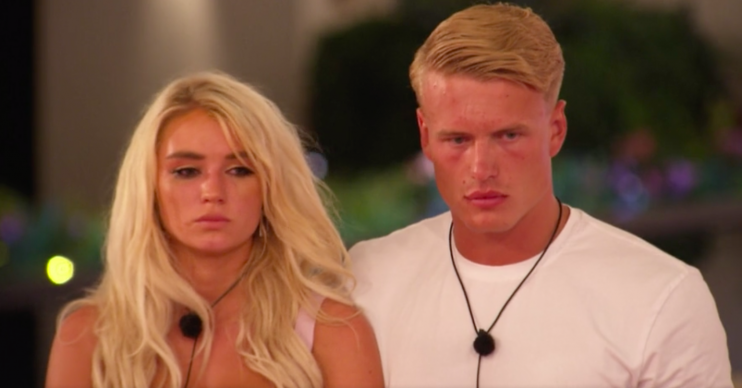 Is their time up in the villa

Fans of Love Island have predicted that Lucie Donlan and George Rains are the next couple to be dumped from the island due to Amy Hart choosing to leave the villa after the vote off.

Last night’s episode ended on a dramatic public vote of their favourite couples, where we then saw Danny and Jourdan get voted out.

The producers weren’t finished, as they revealed that the fellow islanders would have to choose to save either Lucie and George or Amy and Curtis.

Yesterday it was revealed that 26-year-old former air hostess Amy Hart had chosen to leave the ITV2 dating show following her emotional split from Curtis Pritchard.

Viewers have now put two and two together and concluding that the fellow islanders must have kicked out Lucie and George, as Amy decided to leave on her own terms.

Read more: Jeremy McConnell and girlfriend are expecting a baby

Taking to twitter, fans starting theorising saying: “Lucie and George must have been dumped if Amy has walked…”

Another wrote: “That cliffhanger was pointless if Amy walked today wouldn’t mean that she got saved the night before?”

me knowing that Lucie and George are out because Amy has ‘walked out’ of the villa #loveisland pic.twitter.com/4mtPuMcljM

Clearly lucie and George leave because Amy left the show on her own terms #loveisland pic.twitter.com/FJOD07sonl

Leave us a comment on our Facebook page @EntertainmentDailyFix and let us know what you think will happen.