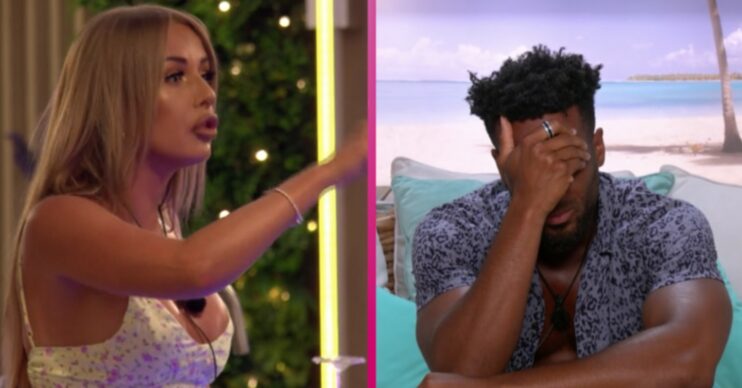 Her yelling appeared to bring Teddy to tears

Letting agent Faye was seen repeatedly screaming expletives at Teddy during the episode.

The Love Island contestants had all watched footage of Casa Amor and Faye accused Teddy of lying about his time in there.

A clip was shown to the group of Teddy admitting to Clarisse that he was attracted to her.

What did Love Island star Faye yell at Teddy?

“Right now, you look like a two-faced [bleep],” she yelled at him.

“Everything on that screen was what I didn’t [bleep]ing know, Teddy.’

Screaming, she continued: “I told you the truth and you told me jack [bleep] about what was on that screen.”

When Teddy calmly asked if she was accusing him of lying, Faye shouted: “You didn’t tell me the [bleep]ing truth, did you?

Teddy cries in the Beach Hut

Speaking in the Beach Hut, Teddy quietly said: “How am I the bad guy here?

“But it makes it very, very difficult when you are being treated like a piece of [bleep] on someone’s shoe.”

Teddy then put his head in his arms and appeared to be crying.

Read more: Love Island fans threaten to ‘boycott show’ as they slam producers for messing with Faye and Teddy

Later, Teddy sat down and attempted to talk to Faye.

But things quickly escalated again, with Faye yelling and swearing at him once more.

Taking to Twitter, Love Island fans have since told how they have complained to television watchdog Ofcom.

One wrote: “3am and I still can’t stop thinking about that episode. Complained to Ofcom and that’s about all I can do.

“Just want Teddy to know how loved he is and how much support he has on the outside world. No one deserves to be spoken to like that.”

First complaint to Ofcom but I'm shaken over tonight's episode. Faye needs help from a mental health professional immediately and Teddy needs to be left alone! It's not entertaining. #loveIsland pic.twitter.com/Mo4PJn7wYV

Another tweeted: “After Faye’s first outburst, producers should have stepped in.

“If Teddy EVER spoke to Faye the way she spoke to him tonight, there would be a contender for Ofcom’s most-complained about show.”

Tagging ITV in, a third said: “I’ve made a complaint to Ofcom but just so you know, I’m very disappointed that not only did you allow Faye to abuse Teddy for most of the show but Iain  made jokes about it.

“Nothing about those scenes were funny and Faye should be kicked out.”

Others have shared screenshots of the complaints they have filed.

One wrote alongside hers: “Faye’s behaviour and abuse to #Teddy has triggered a lot of emotional abuse memories and when I left that situation I vowed to never experience it again. I shouldn’t have to watch it unfold toward others.”

Another posted theirs, explaining: “So I sent my first ever Ofcom complaint cause the Faye situation has really really bugged me.”

They added: “Views and ratings are not more important than Teddy’s mental and emotional well being. She needs to be reprimanded for that behaviour.”

One lady tweeted a shot of her Ofcom form and said:” First complaint to Ofcom but I’m shaken over tonight’s episode.

“Faye needs help from a mental health professional immediately and Teddy needs to be left alone! It’s not entertaining.”