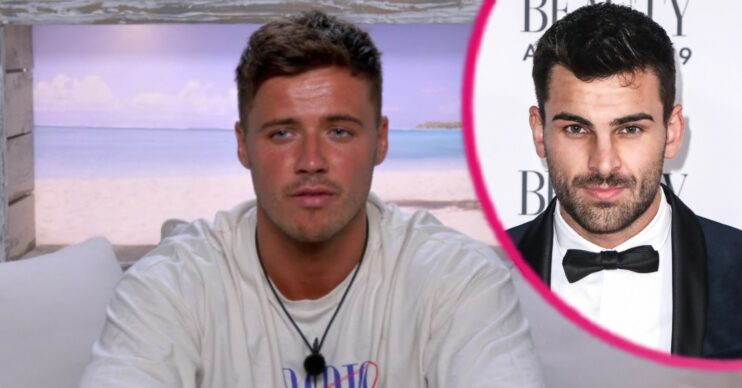 They're certainly both good looking!

The 26-year-old builder was previously coupled up with Faye Winter, before moving on to Rachel Finni.

But could his head be turned by new arrival Lucinda Strafford?

During last night’s Love Island, viewers saw two new bombshells enter the villa while the girls were out at brunch.

Lucinda, 21, was joined by Millie Court, 24, as the pair made their dramatic entrance.

While Brad‘s head was turned by both, he took an exceptional liking to Lucinda.

As she asked the group who was single, he immediately responded: “I’m not.”

However, the hunky builder is currently coupled up with travel agent Rachel.

Rachel previously chose Brad over Chuggs during a brutal dumping this week.

And the two even got steamy between the sheets at one point.

The next morning Rachel told the girls: “We were dry-humping each other.”

How did viewers react to Brad?

Taking to Twitter, one wrote: “Brad is a con artist. He will say and do just about anything to make you believe him.. DISGUSTING BEHAVIOUR.”

A second shared: “The way Brad switched up on Rachel wow. He couldn’t even pretend for a lil longer?”

In addition, a third commented: “Brad’s head turns so much I’m surprised he hasn’t gotten whiplash yet #LoveIsland.”

Another said: “Brad is definitely going to gonna steal the prize money if he wins #LoveIsland.”

Adam became the villain of the show in 2018 thanks to his womanising ways.

Brad is literally the Adam of this season

Comparing the two, one said: “Brad is the next version of Adam Collard from 2018 Love Island.”

A second agreed: “Brad is literally the Adam of this season…”

Another added: “Brad is basically Adam Collard with zero charisma.”

However, one pointed out: “Idk if Brad can be compared to Adam honestly. Adam was constantly getting picked.

“So far, Brad has only been picked once and he has to really graft. Brad really liked Chloe and wasn’t picked… Adam has never felt that feeling before on that show.”

One tweeted: “Brad is playing the game the way it’s meant to be. See what you like, if you don’t then on to the next. At least he’s not selling dreams. He tells them all keep their options open.”